A 62-year-old man presents with an upper body rash that has been worsening over the past 4 to 5 years. On examination, the patient has erythematous papules and plaques with overlying silvery, micaceous scale on the extensor surfaces and dorsal hands. The patient decided to seek a diagnosis due to recent nail changes. Physical examination reveals pitting, leukonychia, and oil spots of the fingernails. Aside from the rash, the patient does not have any other medical problems. The patient does not have any relevant social or family history.

SCLE is highly photosensitive, with predominant distribution on sun-exposed areas (eg, upper back, shoulders, anterior chest, neck, and extensor part of the upper extremities).3,5 The midface is typically spared, although the sides of the face may be involved.5 Lesions of SCLE have two morphologic varieties: a papulosquamous with psoriasiform appearance and an annular configuration with scale and erythematous borders.2,3,5 Although scarring is not generally associated with SCLE, dyspigmentation, particularly hypopigmentation, is a potential sequela.2,5 It is important to note that 40% to 50% of patients with SCLE may eventually meet 4 or more of the American Rheumatology Association’s criteria for systemic lupus erythematosus (SLE). Thus, patients diagnosed with SCLE are at high risk for developing SLE. Patients who do have underlying SLE also present with systemic symptoms, most commonly arthralgia, malaise, and low-grade fever.5

White women are most commonly affected by SCLE.2,4 These two factors—sex and ethnicity—help clinicians understand the risk factors for the development of SCLE. Sex is the strongest factor affecting risk; affected women outnumber men by a ratio of 3:1.4 Ethnicity is another important risk factor and prevalence differs among the subtypes of cutaneous LE; discoid lupus erythematosus, a subtype of CCLE, is predominant in African Americans and SCLE is predominant in white populations.4

Like many other autoimmune conditions, cutaneous LE is caused by the interplay of genetics and environment.6 Many of the genes responsible for cutaneous LE are involved with the innate immune system, including dendritic cells and neutrophils, as well as adaptive immune cells, including both B and T cells.5,7 Keratinocytes and endothelial cells are also involved in the pathogenesis of cutaneous LE.7 It is thought that certain triggering factors, ultraviolet radiation being the most significant for SCLE, instigate an inflammatory cascade; this, in turn, manifests as the classical skin lesions of cutaneous LE. Other triggering factors implicated include medications and infections.7

Diagnosis is made by obtaining a relevant clinical history, performing a detailed skin and physical examination, and ordering proper laboratory and serologic tests.1,5 Because many cases of SLE initially present with cutaneous findings, a thorough work-up is indicated. A complete blood count, assessment of liver and kidney function, and an autoantibody profile are appropriate laboratory tests to order for patients presenting with cutaneous LE.1,3 For SCLE, specifically, medication history is of particular importance because, in some instances, lesions of SCLE have appeared in patients receiving certain medications. Hydrochlorothiazide and terbinafine are common culprits, although calcium channel blockers, nonsteroidal anti-inflammatory drugs, griseofulvin, and antihistamines have also been associated with SCLE.2,5 Serologic studies may be of particular significance for SCLE; approximately 70% of patients display the anti-Ro/Sjögren syndrome-related antigen A antibody.4,5 Skin biopsy reveals epidermal atrophy and superficial inflammatory infiltrate; hyperkeratosis, periadnexal infiltrate, and follicular plugging are not commonly associated with SCLE.5

Several different disease processes may have presentations similar to that of SCLE. As previously stated, there are two morphologic variants of SCLE. Important differential diagnoses to consider for the annular variant are granuloma annulare, tinea corporis, and psoriasis. For the papulosquamous variant, a differential may include psoriasis, erythema annulare centrifugum, and photolichenoid drug eruption.

Scaly, annular, erythematous plaques or papules with central clearing and pustules are classic presentations of tinea corporis.9 Definitive diagnosis of tinea is made via skin scrapings and preparation with potassium hydroxide. Microscopic analysis reveals the presence of dermatophytes.5

Psoriasis is characterized by erythematous plaques, usually covered by silvery, white scales.5 In patients with psoriasis, scaling tends to be thicker and has a micaceous appearance, meaning the scales peel in layers. In addition, the distribution of plaques in psoriasis, which are not limited by photodistribution, tend to affect classic areas such as the extensor surfaces of the elbows and knees. Nondermatologic manifestations, including involvement of the joints and the nails, are also commonly noted in patients with psoriasis.10 Results of a skin biopsy provide definitive diagnosis.

Erythema annulare centrifugum is characterized by annular patches with erythematous borders, a trailing scale, and central clearing.11 The clinical course of erythema annulare centrifugum is highly variable, ranging from a few weeks to several decades. The histologic features are more specific, characteristically showing a perivascular lymphohistiocytic infiltrate known as “coat-sleeving”; thus, a skin biopsy for definitive diagnosis is warranted.12

As previously mentioned, ultraviolet radiation may act as a triggering factor for SCLE. Thus, sun protection is a vital part of therapy.1,4 The mainstays of pharmacotherapy are topical/intralesional corticosteroids and oral antimalarial therapy (eg, hydroxychloroquine sulfate).1,4,5 Notably, antimalarial therapy takes several weeks before any effects may be appreciated, so bridging with topical or intralesional steroids should be considered.1 Immunosuppressive agents, such as systemic corticosteroids, methotrexate, mycophenolate, and cyclophosphamide, as well as immunomodulators, such as dapsone and thalidomide, are also used for systemic therapy, but are generally reserved for antimalarial-resistant cases.1

The patient in this vignette was diagnosed with SCLE. He was started on topical triamcinolone 0.1% ointment along with hydroxychloroquine, 200 mg twice daily. After several weeks, his lesions began to clear and he is currently doing very well.

Psoriasis is a chronic and recurrent inflammatory disease that is caused by the interaction of various genetic, environmental, and immunologic factors. The overall world prevalence of psoriasis is 2% to 4%, although there is significant geographic and ethnic variation.10 Although psoriasis can appear at any age, bimodal peaks at 20 to 30 years and 50 to 60 years of age have been reported. Women tend to have an earlier age of onset, but the natural history of chronicity coupled with intermittent remissions is similar for bothsexes.5,13

Diagnosis is based on the typical erythematous plaques of various sizes, usually covered by silvery white scales.5,14,15 A positive Auspitz sign, pinpoint bleeding resulting from the removal of overlying scale, is suggestive of psoriasis. Notably, the term psoriasis encompasses a number of distinct clinical phenotypes, which include plaque-type, guttate, erythrodermic, pustular, and inverse.5,10 These variants all share three important characteristics: erythema, thickening, and scale.5 The underlying histology, tortuous and elongated vessels close to the skin surface, acanthosis of the epidermis, and hyperkeratosis, reflects these hallmark features.5

Plaque-type psoriasis is the most common variant, comprising approximately 90% of affected patients.10,14 It is characterized by sharp borders, erythema, and papulosquamous lesions.5,10 Plaques have a symmetric distribution and occur mainly on the extensor surface of elbows and knees, the scalp, nails, lower back, and umbilical region.10,15 Guttate psoriasis is characterized by multiple, small, widely dispersed papules and plaques that usually occur around the trunk and proximal extremities. The rash has a sudden onset and is often preceded by a bacterial infection of the upper airways, usually streptococcal pharyngitis in children and young adults.10,15 Erythrodermic psoriasis and generalized pustular psoriasis can be life threatening and are characterized by diffuse erythema with or without scaling and a multitude of diffuse, sterile pustules, respectively. The abrupt withdrawal of systemic steroids (or other systemic therapies) has been identified as a possible triggering factor in both presentations.5,10 Inverse psoriasis involves the intertriginous areas and often lacks the classic scale, due to the moistness of these regions.5

Nondermatologic manifestations include psoriatic arthritis and nail changes, both of which are used for clinical diagnosis. Psoriatic arthritis, which is distinguished from rheumatoid arthritis by its asymmetrical joint involvement, occurs in 5% to 30% of patients with cutaneous psoriasis5,15; 80% to 90% of patients with psoriasis develop nail disease over their lifetimes. Pitting, oil spots, leukonychia, subungual hyperkeratosis, and onycholysis are manifestations of psoriatic onychodystrophy.15

Nummular dermatitis is characterized by scaly, pruritic, coin-shaped lesions usually located on the extremities. The scale is much thinner and not as silver-colored as the one found in psoriasis. The Auspitz sign is also not present in nummular dermatitis.16-18

PRP is characterized by islands of normal skin within larger, well-demarcated, reddish-orange plaques with scale. These islands of sparring are not characteristic of psoriasis. In addition, PRP and psoriasis are histologically different and biopsy results aid in diagnosis.19

For guttate psoriasis, an important differential diagnosis to consider is secondary syphilis. A history of a primary chancre as well as systemic symptoms, such as malaise, myalgia, flu-like symptoms, and lymphadenopathy, is more suspicious of syphilis. A positive rapid plasma reagin test result confirms the diagnosis.5,20

Risk factors for psoriasis include a positive family history, trauma, infections, use of certain drugs, smoking, obesity, alcohol use, and psychogenic stress.5,10,22 These factors demonstrate the intricate pathogenesis of the disease, which involves both a genetic predisposition as well as exposure to certain environmental triggers. Though several gene studies have been undertaken, it is still unknown whether keratinocytes (which undergo abnormal proliferation and differentiation in psoriatic lesions) or certain cytokines and cells of the immune system (specifically tumor necrosis factor-α and the interleukin-23/ T-helper 17 cell axis) are the initiating cause for the disease.22,23 Regardless of the etiology, several therapeutic advances have been made as a result of the current understanding of the disease process.

Treatment for psoriasis is primarily dependent on the severity of the disease as well as patient preference.14 For mild to moderate symptomology and for patients who do not want to be as aggressive with treatment, topical therapies are generally recommended. Such treatments include corticosteroids, vitamin D derivatives, and topical calcineurin inhibitors.5,14 Treatment for severe cases is typically phototherapy in combination with systemic therapy, which includes systemic retinoids, cyclosporine, methotrexate, and biologic agents.5,14 Biologic therapy is increasingly being used in the treatment of moderate to severe psoriasis and in psoriatic arthritis due to rapid clinical response.14 It is important to note that psoriasis, especially severe manifestations, is associated with various comorbidities, including cardiovascular disease, metabolic syndrome, depression, and cancer, and screening for these conditions may also be warranted.5,10

The patient in this vignette was diagnosed with mild plaque-type psoriasis. He was treated with topical triamcinolone ointment. After 1 month, the vast majority of his psoriasis had cleared. 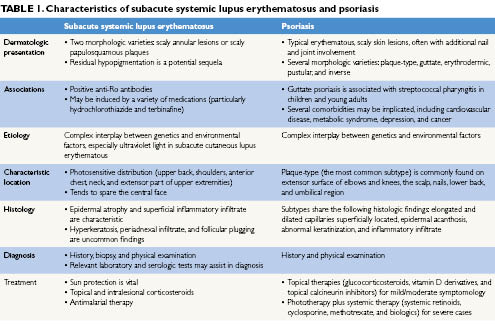