An 18-year-old man presents after vacationing in Myrtle Beach, South Carolina. While swimming in the ocean on his second day, he experienced sharp pain in his thigh and flank. On emerging from the water, well-demarcated erythematous patches were readily apparent. The pain lasted several hours and the rash gradually subsided over the course of 10 days.

Jellyfish StingMany beachgoers are concerned about potential shark attacks, but stings from jellyfish are a much more commonly encountered beach injury. There are approximately 2000 species of jellyfish, 70 of which are harmful to humans, with the deadliest being the...

Many beachgoers are concerned about potential shark attacks, but stings from jellyfish are a much more commonly encountered beach injury. There are approximately 2000 species of jellyfish, 70 of which are harmful to humans, with the deadliest being the box jellyfish (Chironex fleckeri), which makes its home along the coast of Australia.1 A sting from the box jellyfish will lead to rapid onset of pain, inflammation and tissue necrosis, and hypertension, followed by hypotension, cardiovascular collapse, and cardiac arrest.2 Fortunately, the majority of jellyfish stings only cause localized pain and inflammation along the length of tentacle contact, but the potential for gastrointestinal, cardiac, muscular, allergic, and neurological effects still remains. Stings from more lethal species may contain cardiotoxins that lead to ventricular arrhythmias and arrest, neurotoxins that that can cause respiratory failure and arrest, and hemolytic agents that may induce renal failure.1,3

The stinging apparatuses, nematocysts, lie along the length of a jellyfish’s tentacles, which may range in length from a few millimeters to more than 40 meters, depending on the species. When a tentacle comes into contact with something, it triggers a discharge of the nematocyst, which shoots a coiled thread-like shaft lined with venom toward the potential prey.1 Although all jellyfish are capable of nematocyst discharge, most pose no threat to humans, as they are too small to be able to penetrate skin, or the toxins themselves are not harmful. When stung by a harmful species of jellyfish, however, the victim may feel a prick followed by a rapid onset of burning pain, swelling, and itching, as well as the previously mentioned systemic symptoms.

Treatment of jellyfish stings mimics that of other stinging insects. Initial efforts should be directed at initiating basic life support if cardiac symptoms develop, as well as removing the tentacles from the skin, whether with fingers, a credit card, or any other nearby apparatus.1 Application of vinegar is a good initial remedy for box jellyfish or Portuguese man o’ war stings, and ice is helpful in stemming the reaction from most other species.4 Fresh water should be avoided, as it may push toxins further into the skin. Pain control methods such as oral and topical analgesics, baking soda, and ice packs may be employed.5 Because of the potential for systemic reactions and lethality, a sting victim should be monitored for signs of anaphylaxis, respiratory distress, palpitations, or altered mental status.

Next hm-slideshow in Case Studies 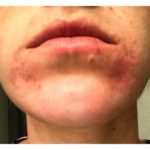