A 24-year-old white female graduate student presents with erythematous, papulopustular patches of skin in a muzzle-like distribution surrounding the mouth, chin, and glabellar region. The lesions are tender to palpation, associated with a stinging and burning sensation, and are aggravated by exfoliating facial washes. Two-year treatment history includes a variety of topical antibiotics, azelaic acid cream, retinoid agents, benzoyl peroxide preparations, topical corticosteroids, and oral tetracycline for cyclic recurrences of outbreaks. These treatment methods were previously successful with complete resolution of each outbreak; however, at present the lesions are persisting despite treatment.

Perioral Dermatitis and Candida SpeciesPerioral dermatitis, an acneiform eruption, is often referred to as periorificial dermatitis and rosacea-like dermatitis. It is a relatively common chronic inflammatory papulopustular dermatitis of the skin affecting the perioral region with occasional spreading to the...

Perioral dermatitis, an acneiform eruption, is often referred to as periorificial dermatitis and rosacea-like dermatitis. It is a relatively common chronic inflammatory papulopustular dermatitis of the skin affecting the perioral region with occasional spreading to the perinasal and periocular areas.1 Perioral dermatitis is characteristically diagnosed in young to middle-aged women (ages 20 to 45 years) and is relatively uncommonly found in children.1,2 It typically manifests as a circumoral eruption of grouped scaly erythematous papules and pustules measuring 1 to 2 mm in diameter sparing the vermilion border.3 Accompanying symptoms of stinging, burning, and tenderness are often mild but can be aggravating. Although the diagnosis of perioral dermatitis appears to be uncomplicated, it is often misdiagnosed and treated inappropriately due to presenting similarly to other facial acneiform and inflammatory eruptions.4

The condition was first described by Frumess and Lewis in 1957 as a cyclic dermatitis and given the name “light-sensitive seborroeid.”2,5 The etiology of perioral dermatitis remains an enigma; however, the use of topical steroids on the face often precedes the appearance of the disease.1,2 Other common causes of perioral dermatitis include fluorinated toothpaste, cosmetics, emotional stress, hormonal factors (eg, oral contraceptives), and ultraviolet radiation.2 Microbiologic factors such as fusiform spirilla bacteria, Demodex folliculorum, Candida species, and other fungi have been implicated as causative factors in perioral dermatitis.2,6

The pathophysiology of topical steroids being the culprit in inducing perioral dermatitis is common as it leads to an overgrowth of yeast, bacteria, and other organisms in the hair follicle due to local immune suppression and impairment in the skin barrier.1,3 Confirmatory diagnosis of perioral dermatitis following topical steroid use involves clinical history of a cyclical pattern or rebound phenomenon, and clinical presentation of predominantly pustules and papules on an erythematous base localized in the circumoral region is usually enough to establish the diagnosis.1

The histopathology of perioral dermatitis from biopsied specimens consists of sebaceous hyperplasia, epidermal edema, and perifollicular and perivascular lymphocytic infiltration; this histologic appearance is similar to that of rosacea.2 Direct examination of skin scrapings and cultures can reveal the growth of the causative organism, such as Candida and other fungi showing yeast and pseudohyphae.6,7 Skin barrier dysfunction can be assessed by conducting specific immunoglobulin E testing against numerous aeroallergens and prick testing.1

Other papulopustular facial eruptions present in a similar fashion as perioral dermatitis, but slight differences in clinical history or clinical presentation can elicit an accurate diagnosis and thus appropriate treatment.  Rosacea, a type of facial acneiform eruption, is histologically similar to perioral dermatitis and affects the central face. Patients often present with a history of flushing, telangiectasias, rhinophyma, and a lack of comedones.4

Seborrheic dermatitis is predominantly retroauricular and is linked to overgrowth of Pityrosporum yeast. History will plausibly include dandruff and scaling of the scalp, eyebrows, and nasolabial region.1,4

Acne vulgaris, a common culprit in the misdiagnosis of perioral dermatitis, involves the presence of comedones, which is a major distinguishing feature in comparison to perioral dermatitis and other facial acneiform eruptions.6 Facial, chest, and back lesions can develop, but they will often lack the symptoms of itching, burning, and stinging usually experienced with perioral dermatitis. In contrast, perioral dermatitis is strictly localized to the face and characteristically spares the vermilion border. The pathophysiology of acne vulgaris is commonly referred to as “clogged pore” due to the inflammation and obstruction of pilosebaceous follicles, creating a microcomedo in areas where sebaceous glands are more prominent. Acne lesions are commonly treated with both physical and chemical exfoliators such as salicylic acid, which can worsen or irritate perioral dermatitis.

The primary goal and first step in management of perioral dermatitis is referred to as “zero therapy,” meaning the discontinuation of all topical pharmacotherapies and abandonment of abrasives, moisturizers, and all other possible irritants.1 Initial worsening of symptoms is presumed with the removal of topical corticosteroid use. Initial treatment options for perioral dermatitis include systemic antibiotics such as tetracycline, minocycline, or doxycycline for a period of 3 to 4 months for effective resolution, while other studies suggest that topical metronidazole cream should be considered initially.1-3 Topical treatments include anti-acne drugs such as benzoyl peroxide, adapalene, and azelaic acid. A combination of a systemic antibiotic with either a topical antibiotic such as clindamycin, metronidazole, or erythromycin or a topical anti-acne drug is commonly recommended.2,3 Severe cases can be treated with isotretinoin or topical immunomodulatory creams (eg, tracrolimus or pimecrolimus).1

The evaluation of coexisting perioral dermatitis and Candida species is a poorly explored topic with exiguous evidence-based reviews, but research has shown that microbiologic factors, including Candida and other fungi, have demonstrated culpability as a causative factor.1,6,7 Due to lack of evidence, topical antifungal agents have not been considered as treatment options for perioral dermatitis, although a few studies have shown patients’ cultured skin scrapings to reveal Candida albicans with rapid and complete resolution upon exposure to antifungal agents.7

For the patient in this case, her perioral dermatitis had previously been controlled with a combination of systemic and topical antibiotic therapies and retinoid agents. After several cyclical recurrences, she began to notice resistance in her typical treatment regimen. Several frustrating months went by with adjustments of both topical and systemic therapies with no resolution of symptoms. She was prescribed and recommended various treatment options including continuing the current pharmacotherapy regimen, initiating isotretinoin, or possibly considering an antifungal agent in the event the organism involved is of Candida species.

One month later, the patient returned to the clinic with remarkable improvement after the use of an over-the-counter topical antifungal, clotrimazole cream. At follow-up, after a 3-month period of applying clotrimazole topical cream, the patient remained asymptomatic and lesion free, and she was advised to continue using the cream as needed. Even though it is not well documented, the use of a topical antifungal agent proved to be effective therapy in the treatment of perioral dermatitis for the patient in our case. 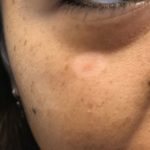