Transforming growth factor (TGF)-β2 signaling in patients with high-risk early-stage melanomas is able to drive the downregulation of autophagy regulatory protein autophagy-and-beclin-1 regulator 1 (AMBRA1) in keratinocytes, and loss of peritumoral AMBRA1 is associated with decreased epidermal integrity, according to data from a study published in the British Journal of Dermatology.

Researchers sought to determine whether paracrine TGF-β signaling results in the loss of AMBRA1 and loricrin (AMLo) levels in the epidermis overlying early-stage melanomas.

The percentage of TGF-β2–positive cells, but not TGF-β3 cells, was significantly increased in tumors with at least a 25% decrease in AMBRA1 expression in the overlying epidermis or if ulceration was present (P < .05).

When AJCC stage I tumors were stratified into low- and high-risk groups based on AMLo status, a significant increase was observed in the percentage of TGF-β2–positive tumor cells in the high-risk group (P < .05). In addition, the percentage of TGF-β2–positive tumor cells was increased in AJCC stage I tumors that metastasized within 7 years vs those in which disease remained localized (P < .01).

The study authors used siRNA to downregulate AMBRA1 levels in keratinocytes before incorporating them into epidermal skin equivalents to examine the effects of AMBRA1 loss on epidermal homeostasis. AMBRA1 knockdown resulted in a thicker epidermis with an increased number of keratinocytes (P < .05).

TGF-β2 treatment of differentiated keratinocytes led to a significant downregulation of claudin-1, which was partially rescued by ALK5 inhibition. Also, siRNA-mediated knockdown of AMBRA1 in keratinocytes resulted in a significant decrease in claudin-1 and was not further decreased by TGF-β2 treatment (P < .01), which suggests that claudin-1 expression is dependent on AMBRA1, according to the researchers.

The loss of AMBRA1 in the epidermis overlying nonulcerated stage I melanomas was associated with a decrease in claudin-1 levels (P < .05), parakeratosis, and a trend for an increased frequency of features of consumption of the epidermis and subepidermal cleft formation. The association between peritumoral AMBRA1 loss and decreased claudin-1 was also found in a small group of stage II melanomas (P < .01).

Disclosure: Two of the study authors declared affiliations with a biosciences company. Please see the original reference for a full list of authors’ disclosures. 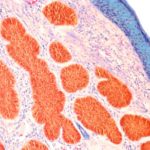