More than a decade ago, a study from researchers out of Northwestern University showed that the use of preemptive treatment such as skin moisturizers, sunscreen, topical steroids, and doxycycline could reduce the incidence of grade 2 or worse skin toxicities by more than 50% and improve quality of life among patients with metastatic colorectal cancer undergoing treatment with any EGFR inhibitor.1

However, 10 years later, another study out of Boston’s Dana-Farber Cancer Center showed that more awareness is needed about these important interventions.2

“EGFR inhibitor skin side effects are among the most well-described in oncology,” said Nicole R. LeBoeuf, MD, MPH, of the department of dermatology at Dana-Farber. “They are predictable, dose dependent, and happen in the majority of patients.”

In 2014, Dr LeBoeuf and colleagues developed the Skin Toxicities from Anticancer Therapies (STAT) program to provide urgent and follow-up dermatologic care for oncology patients with dermatologic adverse events at Dana-Farber. Initially these interventions were implemented only at Dana-Farber’s main campus, but later they were adopted at 4 additional satellite locations.

“One thing we offer the oncology program is to see any patient — in advance of starting these treatments — to offer supportive counseling and anticipatory guidance on everything that could happen, and we provide urgent or next-day access for patients suffering from these side effects,” Dr LeBoeuf said. She said they educate patients and referring physicians that patients should use daily sunscreen, moisturizer, and topical steroids for prevention, she added.

To test the efficacy of this program, Dr LeBoeuf and colleagues compared outcomes among adults who received at least 1 dose of the EGFR inhibitor cetuximab in 2012 — prior to the start of STAT — and in 2017, 2 years after the program’s implementation. 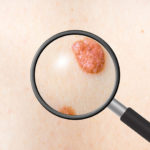 Benefit of Adjuvant Dabrafenib Plus Trametinib Persists in Melanoma