Rate of Cancer in Teens, Young Adults Increased From 1973 to 2015 - Dermatology Advisor

HealthDay News — In adolescents and young adults (AYAs), cancer has a unique epidemiological pattern and is a growing concern, with an increased rate of cancer from 1973 to 2015, according to a study published online Dec. 1 in JAMA Network Open.

Alyssa R. Scott, from the Penn State Cancer Institute in Hershey, and colleagues characterized the epidemiology of cancer in AYAs aged 15 to 39 years with respect to patient demographics, frequency of cancer types, and cancer incidence trends over time. Registry data were obtained from the Surveillance, Epidemiology, and End Results database from Jan. 1, 1973, to Dec. 31, 2015. The study included 497,452 AYAs diagnosed with cancer from 1973 to 2015.

The researchers observed an increase in the relative incidence of carcinomas and a decrease in the relative incidence of leukemias, lymphomas, germ cell and trophoblastic neoplasms, and neoplasms of the central nervous system as AYAs aged. Among female AYAs, 24.7, 16.6, and 11.5 percent were diagnosed with breast carcinoma, thyroid carcinoma, and cervix and uterus carcinoma, respectively. Among male AYAs, 18.5, 10.2, and 9.6 percent were diagnosed with testicular cancer, melanoma, and non-Hodgkin lymphoma, respectively. From 1973 to 2015, the rate of cancer in AYAs increased by 29.6 percent, with a mean annual percentage change (APC) of 0.537 per 100,000 persons. For both male and female AYAs, kidney carcinoma increased at the greatest rate (APCs, 3.572 and 3.632, respectively).

“This study demonstrated that cancer in AYAs has a distinct distribution and is a growing problem and that continued research in this area is necessary to address the unique needs of this population,” the authors write. 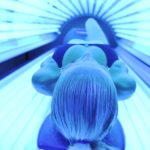 Tanning Bed Use by Young Women May Increase Endometriosis Risk