Older age at the diagnosis of mycosis fungoides (MF) and Sézary syndrome (SS) is not predictive of worse disease-specific outcomes, according to a retrospective study published in the Journal of the European Academy of Dermatology and Venereology. In addition, investigators found that elderly patients who have early-stage disease that involves <10% of the skin surface, but no plaques or folliculotropism have an excellent prognosis.

Investigators from Memorial Sloan Kettering Cancer Center in New York City sought to assess the outcomes and prognostic factors in patients who were ≥65 years of age and had been diagnosed with MF/SS. Researchers explored survival, rate of disease progression, and histopathologic variables in a group of 174 elderly patients who were diagnosed with MF/SS between 1992 and 2015. Patients were assigned to 1 of the following age groups: 65 to 74, 75 to 84, and ≥85. Overall, 56.3% of the participants were men and 43.7% were women. The mean patient age was 73 years.

Patient gender, increasing clinical stage, T and B classifications, development of large cell transformation (LCT; defined as >25% large cells of atypical lymphocytes on histopathology), and elevated lactate dehydrogenase levels were all significant predictors of poor survival or disease progression. In fact, although LCT at the time of diagnosis did not have a significant impact on patient survival, the development of LCT during follow-up was a negative prognostic factor for overall survival (hazard ratio [HR] 1.72; 95% CI, 1.80-7.97; P <.001) and disease-specific survival (HR 12.27; 95% CI, 4.25-35.39; P <.001). 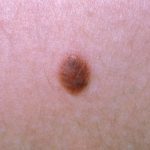 Risk for Nevus Development in Children Aged 3 to 16 Years