Immune-mediated inflammatory conditions such as inflammatory bowel disease (Crohn disease [CD], ulcerative colitis [UC]), psoriasis, and rheumatoid arthritis (RA) are frequently treated with antitumor necrosis factor-alpha (TNF-α) agents. TNF-α inhibitors (TNFIs) have shown significant clinical safety and efficacy profiles in these inflammatory conditions; however, the potential risks of long-term use are a consistent concern of both physicians and patients.

As the TNF-α pathway plays a critical role in tumor surveillance, there is concern that inhibition of this pathway could predispose patients to certain malignancies.1 One such cancer that is of great concern with respect to the TNF-α pathway is melanoma.1 As the use of TNFIs and other biologics have grown increasingly popular, there has been noteworthy research interest in the actual risk of melanoma in these patients.

When evaluating a study estimating the risk of melanoma in patients receiving TNFIs, it is critical to determine if the comparison group is either the general population or patients with inflammatory conditions treated with other systemic therapy. There is a meager number of studies specifically evaluating the latter, especially studies with IBD and psoriasis. Interestingly, Esse and colleagues recently published a systematic review and meta-analysis in JAMA Dermatology specifically evaluating the risk of melanoma in patients with IBD, RA, and psoriasis who were treated with biologic therapy compared to those who had received only other “conventional” systemic therapy.2

The authors identified 7 studies, all of which were published between 2007 and 2019, and were cohort studies that were conducted in several countries (United States, Denmark, Sweden, and Australia). These studies included a total of 34,029 patients who received biologic therapy compared with 135,370 biologic-naive patients who had received conventional systemic therapy. Mean patient-follow duration ranged from 1 year to 5.48 years. Most studies included TNFIs, however, there were some patients receiving abatacept and rituximab were also included in the meta-analysis.

All of the included studies were considered high-quality studies, according to the review authors, and there was no evidence of publication bias or significant heterogeneity in the studies across the patient groups. When specifically looking at each biologic agent individually (TNFIs, abatacept, rituximab), there remained no statistically significant difference in melanoma risk when compared with patients receiving conventional therapy. If individual RA studies were excluded, sensitivity analyses showed that the pRR continued to not be statistically significant from patients receiving conventional therapy.

A key distinguishing factor of this study was inclusion of patients with inflammatory conditions whom were biologic naive and their comparison with those receiving standard therapies. This study is interesting to juxtapose with several prior studies evaluating similar melanoma outcomes. Singh and colleagues published a similar systemic review and meta-analysis in Clinical Gastroenterology and Hepatology in 2014 that specifically evaluated the risk of melanoma in patients with IBD.3 This review evaluated 12 studies that included 172,837 patients with IBD and found a pooled crude incidence rate (IR) of melanoma in patients with IBD of 27.5 cases per 100,000 person-years (95% CI, 19.9-37). Overall, IBD was associated with a 37% increased risk of melanoma. This relative risk was higher in those patients with CD (RR, 1.80; 95% CI, 1.17-2.75) compared with those with UC (RR, 1.23; 95% CI, 1.01-1.50). This increased risk of melanoma was found to be independent of biologic therapy.

Another systematic review published by Peleva and colleagues in the British Journal of Dermatology in 2018 evaluated 8 prospective cohort studies evaluating the risk of all cancers in patients with psoriasis who were treated with biologic therapies.4 The authors found an increase in nonmelanoma skin cancer (NMSC) — particularly squamous cell carcinoma — but there was no evidence of increased risk of melanoma. This review was limited by the inclusion of only 1 study evaluating melanoma risk in patients treated with ustekinumab. 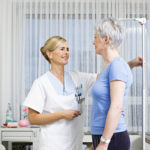 Study Investigates Association Between Height and Risk for Invasive Melanoma