Encorafenib plus binimetinib can provide long-term benefits in patients with BRAF V600-mutant melanoma, according to research published in the Journal of Clinical Oncology.

A 5-year update from the COLUMBUS trial showed longer progression-free survival (PFS) and overall survival (OS) for patients who received encorafenib plus binimetinib, compared with those who received vemurafenib.

At the data cutoff, 13.0% of patients in the combination arm, 2.1% in the vemurafenib arm, and 6.2% in the encorafenib arm remained on therapy. The primary reason for discontinuation was progressive disease for 55.2%, 59.7%, and 53.6% of patients, respectively.

The incidence of grade 3-4 adverse events was 70% in the combination arm, 66% in the vemurafenib arm, and 70% in the encorafenib arm. Adverse events led to dose adjustments or interruptions in 56%, 62%, and 72% of patients, respectively.

Disclosures: This research was supported by Pfizer. Some study authors declared affiliations with biotech, pharmaceutical, and/or device companies. Please see the original reference for a full list of disclosures. 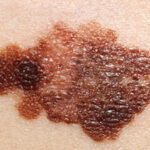