Melanoma, the most aggressive cutaneous cancer, metastasizes at very early stages of tumor development. Advances in treatment have produced therapies that target specific melanoma-associated mutations, as well as immune checkpoint blockade (ICB) therapies that strengthen patients’ anti-tumor immune response. Although these therapies allow drastic improvements in clinical outcomes for many patients, some patients exhibit melanomas with intrinsic or acquired resistance to these gene-based therapies. An article published in The Journal of Dermatology reviews melanoma classifications, genetic and phenotypic characteristics, and existing as well as emerging therapies.

In 2018, the World Health Organization (WHO) changed melanoma classification from a solely anatomical basis to a clinical, histologic, epidemiologic, and genomic basis, and incorporating ultraviolet ray (UVR) exposure as well, describing 9 distinct “pathways” for the development of cutaneous, mucosal, and uveal melanomas with their potential precursor and simulant lesions. The most common WHO subtype in people with fair coloring is the low cumulative solar damage (CSD) melanoma, typically including superficial spreading melanoma (SSM), and the most common WHO melanoma subtype in people with darker coloring is the non-CSD melanoma, which includes acral melanoma (AM). Tumor mutation burden (TMB) is high in CSD melanomas and lower in non-CSD melanomas, with some exceptions, such as iris melanoma among the uveal melanoma (UM) subtype.

With whole exome sequencing (WES) and whole genome sequencing (WGS), researchers were able to identify significantly mutated genes (SMGs) in melanoma subtypes, which were used in The Cancer Genome Atlas (TCGA) to classify CM into 4 subtypes based on the pattern of the most prevalent SMGs. The study authors reviewed that melanoma tumors can also be differentiated based on their frequency of single-nucleotide variants (SNVs), indel, somatic structural variants, copy number variations, UV signature, and whole genome duplication (WGD).

Research has shown that melanoma cells can reversibly shift between states, switching to more invasive phenotypes, known as phenotypic switching, the study authors noted. This can be influenced by extracellular factors, epigenetic factors, or even certain treatments such as has been shown with T-cell transfer therapy. They also cited studies that have shown that melanoma cells with different gene expression profiles can work in tandem to enhance survival. Most of the phenotypic switching literature is concerned with CM.

However, a major cause of therapeutic resistance is tumor heterogeneity at genetic and non-genetic (phenotypic and microenvironmental) levels. There are numerous known mechanisms of resistance to BRAF and MEK inhibitors including acquired mutations in genes of the MAPK pathay, and increasing evidence suggests non-genetic mechanisms for resistance as well. For ICB therapy, several models combine clinical, genomic and gene expression data to predict clinical outcomes. Therefore, the investigators wrote, the frontier in resistant melanoma therapy is targeted and ICB therapies that simultaneously suppress the drug-tolerant or resistant tumor cell populations. There are 2 distinct MITF-negative states that are highly de-differentiated and therefore resistant to targeted and IBC therapies.

Researchers are targeting these states concomitantly with standard melanoma therapies and have introduced several promising drugs such as a tyrosinase-processed antifolate prodrug TMECG and a drug-conjugated antibody against MITF-regulated melanosomal differentiation antigen GPNMB, the study authors concluded. More pre-clinical and clinical research is needed to hone the correct methods for drug combinations, doses, and administration schedule. 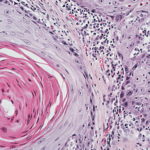