Although rosacea is a benign disease, its effects are more than skin deep. Emerging evidence shows that depression and anxiety loom large in people with this disfiguring disease.1 Although it is a common dermatologic condition — affecting 22% of the population — the erythematotelangiectatic, papulopustular, phymatous, and ocular forms of rosacea can make patients especially self-conscious.1,2

Rosacea breeds low self-esteem, which in turn leads to social isolation.1 Historically, rosacea was thought to be a sign of psychiatric illness or alcoholism, which only contributes to existing poor perceptions of the disease.1 Anxiety associated with rosacea creates a vicious cycle, as embarrassment tends to exacerbate the physical blushing associated with the disorder.1

Heisig and colleagues, who conducted a review of 13 studies on the psychological effects of rosacea, sought to determine what most troubles patients with rosacea and how clinicians can help patients overcome the psychosocial aspects of the disease.1 They found that dermatologists largely underestimate the impact that the disease has on their patients’ quality of life (QoL), particularly those in the 18- to 24-year age range.1

The Stigma Is Real in Rosacea

In one of the few studies to investigate the stigma associated with rosacea, Halioua and colleagues surveyed patients with rosacea (N=807; mean age at rosacea presentation, 31.3 years) to determine the extent of their psychological distress.3 Approximately one-third of respondents reported feeling “dirty and ugly” because of their rosacea.3 Patients who felt stigmatized were more likely to avoid social interaction and more than half of those patients felt depressed because of their isolation and shame.3 Not surprisingly, younger patients tended to feel more stigma than did older patients (39.64 years vs 46.23 years), and those who were employed felt more embarrassed about their appearance than those who did not work full time.3

Men were more likely to feel ridiculed for their appearance than women (P =.0037), even though rosacea is more prevalent in women.3 The researchers hypothesized that men tend to get more severe rosacea, such as the phymatous subtype, which results in skin thickening, especially around the nose.3

The Nature of Psychosocial Distress

Three of the studies used the Dermatology Life Quality Index, a validated instrument of 10 questions that can determine the QoL for 40 types of dermatologic conditions.2 One of the studies used the RosaQoL, a rosacea-specific questionnaire. Overall, the QoL scores for rosacea (4.3 or small effect) were comparable to those of other disfiguring dermatologic diseases that yielded a moderate effect, including atopic dermatitis (8.5) and psoriasis (6.7).2 One of the studies measured QoL by rosacea subtype with mean Dermatology Life Quality Index scores: 4 for patients with erythematotelangiectatic rosacea, 7 for patients with papulopustular rosacea, and 5.6 for those with phymatous rosacea.2

For clinicians who are reluctant to delve into psychological matters with patients, co-author and dermatology professor Steven R. Feldman, MD, PhD, from the Wake Forest University School of Medicine in Winston-Salem, North Carolina, in an interview with Dermatology Advisor, suggested that fellow dermatologists “keep the psychosocial impact of a facial skin disease in mind as we treat patients. I’m not sure we need to do psychological screens, but we and others involved in the health care system need to make sure we give patients with rosacea adequate treatment to control their disease. We dermatologists treat the underlying inflammatory disease, the rosacea and anticipate that any problems the rosacea is causing — psychological or otherwise — would resolve as the rosacea improved.”

Managing the Physical Manifestations of Rosacea

Rosacea treatment formerly borrowed from other related conditions, such as beta-blockers to reduce facial flushing and antibiotics for concomitant acne papules.5 Newer treatments, however, specifically target the pathogenesis of rosacea and its symptoms.5

Topical brimonidine and intense pulsed light therapy can treat the persistent erythema, while topicals such as metronidazole or oral doxycycline can reduce the inflammatory papulopustules, and cyclosporine can alleviate ocular rosacea symptoms.5 The most severe form of the disease, phymatous rosacea, however, does not yet have a dedicated treatment.5 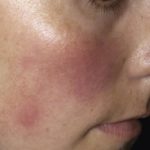