There is growing evidence that rosacea is an indication of several systematic comorbidities, and very well may represent a chronic, systematic, inflammatory state, according to findings from a  study published in Clinics in Dermatology.

The researchers investigated associations between rosacea and a number of systemic diseases—hypertension, dyslipidemia, cardiovascular disease, and inflammatory bowel disease among them. Databases, large-scale studies, and meta-analyses were reviewed, the findings of which support the investigators’ belief that rosacea is “not just a skin disorder but a systemic disease process.”

The investigators cited 1 study that found patients with rosacea had a significantly elevated rate of hypertension. The study observed a higher odds ratio (OR) for hypertension in men with rosacea than woman with rosacea (1.46 vs. 1.05) with an overall OR of 1.17. Another study found that in addition to the significant association between rosacea and hypertension, there was also a positive correlation based on the severity of rosacea.

There are also links between rosacea and cardiovascular disease, it was noted. There are established associations between rosacea, hypertension, dyslipidemia, and insulin resistance, which are all known risk factors for developing atherosclerosis and all the complications that accompany the diagnosis, such as coronary artery disease, peripheral artery disease, and cerebral infarction. Carotid-intima thickness and epicardial fat thickness are considered markers of atherosclerosis and cardio-metabolic risk, respectively. The study authors cited 3 studies that have all indicated elevated levels of these markers in patients with rosacea vs control participants.

There have been several large-scale population studies and 2 meta-analyses that have shown a strong bidirectional association between rosacea and inflammatory bowel disease (IBD). A study found an increased risk of rosacea in patients with IBD and a higher risk of rosacea during an IBD flare-up, supporting the idea that IBD and rosacea are of the same epithelial inflammatory process. A cohort study in Taiwan found rosacea to be an independent risk factor for the development of IBD. 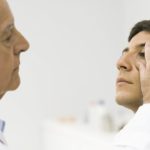 With Ocular Rosacea, Two Clinicians Are Better Than One