Alcohol consumption increases the risk for phymatous rosacea, according to study findings published in the Journal of Cosmetic Dermatology.

Researchers conducted a systematic review and meta-analysis to determine the association between alcohol intake and rosacea. They searched PubMed, Embase, and the Cochrane database from inception through February 16, 2021.

This suggested to the researchers that “the heterogeneity decreased distinctly in all subgroup analyses of rosacea subtypes and alcohol consumption is a risk factor for phymatous rosacea rather than for ETR and PPR.”

Some limitations to the results were noted, as in 2 studies the control groups were patients with other dermatologic issues and not healthy individuals, and in 3 studies the case groups excluded patients with phymatous rosacea. Also, the standards of alcohol consumption were varying and ambiguous in some studies, and the analysis included only studies in English, which might lead to a biased selection. 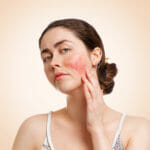