A Spectrum of Options: Diagnosing and Treating Rosacea in People of Color - Dermatology Advisor

The demographics of the United States are changing, meaning dermatologists and other clinicians are seeing a more racially and ethnically diverse population. In fact, the US Census Bureau projects that by 2060, people with skin of color will comprise more than 50% of the US population.1

Rosacea has been reported in countries with significant populations of people of color throughout Africa, Asia, and South America, with rates as high as 10%.2 Further, separate studies that looked at rosacea patients in Colombia, Korea, and Estonia found that a significant percentage of patients had Fitzpatrick skin phototype IV or V.2 However, despite these reports, rosacea is often still believed to be a disease affecting fair-skinned patients with Celtic and North European heritage.2

Patients of color do not seek medical attention for rosacea as often as Caucasian patients, but it is not an unusual condition in this population. The condition might be underreported and underdiagnosed in patients of color because of the challenges associated with distinguishing erythema and telangiectasia in dark skin.2 The erythema that characterizes some types of rosacea may be overlooked in this population.2 As a result, these patients may not seek treatment unless the disease is severe. Improving the detection and treatment of rosacea in people of color to safeguard against inadequate treatment and uncontrolled, or possibly disfiguring, progression is important.2

The Ramifications of Missed Diagnoses

Because darker skin often can mask the symptoms of rosacea, diagnosis may be delayed. Specifically, this population is more likely to experience misdiagnoses and symptoms that may persist for a year or more.2

Unfortunately, delayed diagnosis can lead to:2

“As dermatologists and other physicians who treat cutaneous disease, we do our skin of color patients a tremendous disservice when we misdiagnose a disorder because of limited knowledge or outdated teachings,” said Susan C. Taylor, MD, founding director, Skin of Color Center, St. Luke’s-Roosevelt Hospital Center, New York City.4 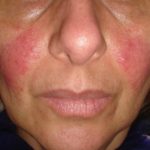