Patients with psoriatic arthritis (PsA) who were taking and were naïve to biologic medications experienced symptom relief with apremilast as early as 2 weeks into therapy, with sustained clinical improvement through 1 year of treatment, according to data published in the Annals of Rheumatic Diseases.

The results were superior to placebo controls, and were derived from the Assessing Apremilast Monotherapy in a Clinical Trial of Biologic-Naïve Patients With Psoriatic Arthritis (ACTIVE) study, a randomized, double-blind, parallel-group, controlled trial (Clincaltrials.gov ID NCT01925768).

Although biologics are often used in conjunction with or following therapy with conventional synthetic disease-modifying antirheumatic drugs, there is concern regarding their long-term use because of an uncertain safety profile. The ACTIVE study offered researchers the opportunity to better establish chronic tolerability and examine the potential for early onset of therapeutic benefit (before 16 weeks).

The safety profile of apremilast was acceptable and comparable to that of other studied medications for PsA. Through 24 weeks, the main adverse effect was diarrhea (14.7% for the apremilast group vs 11.0% for placebo). Serious adverse effects were limited for both the apremilast and the placebo groups (2.8% and 4.6%, respectively).

The authors identified several limitations, including heterogeneity of disease duration; investigator discretion regarding early escape; lack of skin, nail, or dactylitis evaluation; and lack of imaging studies to examine structural damage. They also urged caution when interpreting morning stiffness measurements because of a limited understanding regarding the relationship with disease activity in PsA.

The analysis demonstrated that monotherapy with apremilast should be considered safe and effective in patients with PsA who have never received biologic therapy. Furthermore, the results suggest that some patients may see early onset of therapeutic effect. 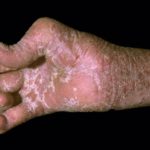