Patient experiences with psoriasis-associated stigma were described in study data published in the Journal of Psoriasis and Psoriatic Arthritis. In a cross-sectional survey of those with psoriasis, the majority indicated that they anticipated or experienced some level of stigma from others, including perceptions that their condition was “contagious,” “dirty,” or “unattractive.”

Investigators conducted a series of patient surveys at the University of Pennsylvania dermatology clinics. During routine clinic visits, patients were invited to complete a 5-minute survey that captured psoriasis symptoms and experience with disease-related stigma. Survey outcome measures were developed based on scales previously used to assess other types of health-related stigma. Anticipated stigma was measured via a battery of tests, including a stereotype endorsement scale, a social distance scale, and a series of emotional response items. Perceived stigma was assessed using a 6-item validated questionnaire. Patients were also asked to report demographic data, disease severity, and disease duration. Descriptive statistics summarized study results. Linear regression was used to identify correlates of anticipated and perceived stigma.

Per these survey results, patients with psoriasis frequently perceive stigma from others and anticipate future stigmatizing experiences. Self-reported disease severity, disease duration, and age were also associated with perceived and anticipated stigma.

As study limitations, investigators cited the relatively small cohort size and risk for selection bias: patients with greater perceived stigma may be more likely to complete a survey measuring stigma.

“[Even so,] there is a high prevalence of anticipated and perceived stigma reported by adult patients with psoriasis,” investigators wrote. “Our results suggest that objective measures of disease severity documented in routine clinical care do not reflect a patient’s experience of stigma and that additional methods of accurately screening and monitoring patients for stigmatization are needed to understand the impact of stigma on patients with psoriasis.” 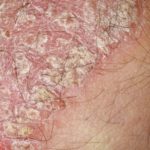