Use of the physician’s global assessment (PGA) of disease activity in patients with psoriatic arthritis (PsA), as measured with a 0- to 100-mm visual analog scale (VAS) and separate VAS scales for musculoskeletal (PhysMSK) and dermatologic (PhysSk) disease manifestations, are reliable tools for the evaluation of musculoskeletal and dermatologic disease activity, according to the results of the multicenter Group for Research and Assessment of Psoriasis and Psoriatic Arthritis (GRAPPA) study. Findings from the analysis were published in The Journal of Rheumatology.

A total of 17 centers from 8 countries enrolled 319 consecutive patients with PsA. Overall, 58% of the participants were men and the average patient age was 51±13 years. All participants received PGA, PhysMSK, and PhysSk evaluation forms at enrollment and after 1 week. Patients recorded their clinical data in terms of musculoskeletal disease manifestations and dermatologic symptoms.

When findings at enrollment and 1 week were compared, scores revealed no significant variation. The intraclass correlation coefficients were 0.87 for the PGA, 0.86 for the PhysMSK, and 0.78 for the PhysSk, which confirmed the reliability of the instruments. Scores on the PGA were significantly dependent on PhysMSK and PhysSk scores (P <.0001), with a major effect reported with the musculoskeletal components for PhysMSK (β=0.69; 95% CI, 0.64-0.74) vs PhysSk (β=0.32; 95% CI, 0.27 to 0.37). This demonstrates that the musculoskeletal component is recognized as the main clinical concern compared with dermatologic manifestations. 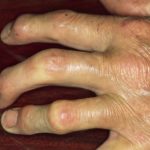