All combinatorial ultraviolet (UV)-based therapy regimens for psoriasis were more effective than UV monotherapy, a network meta-analysis published in the Annals of Medicine found.

Investigators with Xiangya Hospital in Changsha Hunan, China searched publication databases through January 2021 for studies of UV-based phototherapy for the treatment of moderate to severe psoriasis. The primary efficacy outcome was the percentage of patients achieving a 75% or greater improvement of Psoriasis Area and Severity Index (PASI75) and the primary safety outcome was the percentage of patients withdrawing due to adverse events (AEs).

Together, the most effective and safest therapy was PUVA plus calcium and vitamin D (clusterank value, 7393.2).

This major limitation of this study was that the investigators observed dubious asymmetry in the funnel plots due to small-study effects.

These data indicated to the investigators that all combinatorial therapy regimens were superior to UV monotherapy without increasing risk for AEs. The study authors concluded that cPUVA and cUVB combined with calcium and vitamin D could be potential safe and effective first choice therapies for patients with moderate to severe psoriasis. 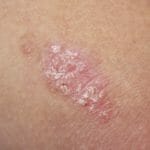