When secukinumab loses efficacy in treating patients with psoriasis, combination therapy counteracts that loss, according to findings from a study published in Pharmaceuticals.

A 52-week multicenter retrospective observational study involved 3 Italian primary referral centers and was performed from February 2016 to December 2020. Patients with plaque psoriasis who experienced a secondary loss of function of secukinumab after more than 1 year and were subsequently treated with a systemic therapy were consecutively enrolled. Patient follow-up started at T0, beginning the secukinumab monotherapy induction phase; T1 was the 16-week mark of secukinumab monotherapy, T2 introduced combination therapy, T3 was week 16 of the combination therapy, and T4 marked 52 weeks after starting combination therapy.

The study included 40 participants (24 men) with a median age of 44.5 years (38.0-51.3). The patients were randomly assigned to combination therapy, either with cyclosporin (n=11), methotrexate (MTX) (n=15), NB-UVB (n=7), and apremilast (n=7). Apremilast and MTX were prescribed for the entire duration of the study; cyclosporin was administered for 3 months, stopped for a month, and then administered for another 3 months; NB-UVB sessions were received in 3 cycles of 12 sessions each.

Combination therapy started at T2; patients had a Psoriasis Area and Severity Index (PASI) 8 and a Dermatology Life Quality Index (DLQI) of 13. After 16 weeks of combination therapy, patients reached a median absolute PASI of 3 and this pattern continued after 52 weeks, giving a statistically significant result (P < .05). “Remarkably,” the study authors wrote, at T4, patients displayed a DLQI of 3–a median improvement of 82.8%. No adverse events were observed and no patients were switched to other therapies.

As limitations to the study, the investigators cited the limited sample size and caregiver-reported outcomes.

Data from this clinical trial led researchers to conclude that “the combination/rescue therapy in all enrolled subjects that experienced secondary secukinumab failure was safe and contributed to re-achieve and maintain at least PASI 75 without switching to other biologics.” 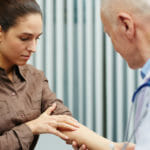