According to the results of a recent phase 3 clinical trial published in Clinical Infectious Diseases, iclaprim was noninferior to vancomycin at early time points and was well-tolerated in the treatment of acute bacterial skin and skin structure infections (ABSSSIs) suspected or confirmed to be caused by Gram-positive pathogens.

In the REVIVE-1 trial (ClinicalTrials.gov identifier: NCT02600611), 600 patients with ABSSSIs due to confirmed or suspected Gram-positive bacteria were randomly assigned to receive iclaprim 80 mg or vancomycin 15 mg/kg intravenously every 12 hours for 5 to 14 days. Efficacy was measured based on a ≥20% reduction in lesion size (early clinical response) compared with baseline at 48 to 72 hours after the initiation of treatment. Clinical cure rate at 7 to 14 days, safety, and tolerability were also evaluated.

In an intention-to-treat analysis, early clinical response at 48 to 72 hours was comparable in patients who received iclaprim (80.9%) and patients who received vancomycin (81.0%). In a similar fashion, clinical cure rates at the test-of-cure visit were similar for iclaprim (83%) and vancomycin (87%). In pre-defined cohorts defined by lesion type, pathogen, diabetes status, and renal impairment severity, iclaprim and vancomycin early clinical response rates were comparable.

Based on the results, the study investigators concluded that “iclaprim may serve as an alternative option for treatment of ABSSSI caused by gram-positive pathogens, including drug-resistant bacteria.”

Disclosure: This study was supported by Motif Biosciences plc. 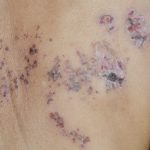 Dermatologists Should Be Aware of Herpes Zoster Risk Factors