HealthDay News — A fourth dose of mRNA COVID-19 vaccine is immunogenic and safe, but has limited effectiveness against severe acute respiratory syndrome coronavirus 2 (SARS-CoV-2) infection, according to a study published online March 16 in the New England Journal of Medicine.

Gili Regev-Yochay, M.D., from Sheba Medical Center Tel Hashomer in Ramat Gan, Israel, and colleagues conducted an open-label, nonrandomized trial to assess the immunogenicity and safety of a fourth dose of BNT162b2 or mRNA-1273 administered four months after the third dose in a series of three BNT162b2 doses. A total of 154 eligible health care workers received a fourth dose of BNT162b2 and 120 received mRNA-1273. Two age-matched controls were selected for each participant.

The researchers found that immunoglobulin G (IgG) antibodies against the SARS-CoV-2 receptor-binding domain were induced by both mRNA vaccines after the fourth dose, and neutralizing antibody titers were increased. Each measure was increased ninefold to 10-fold, to titers that were slightly higher than those achieved after the third dose. In the control group, antibody levels continued to wane. Overall, 25.0, 18.3, and 20.7% of controls and participants in the BNT162b2 group and mRNA-1273 group were infected with the omicron variant, respectively. Vaccine efficacy against any SARS-CoV-2 infection was 30 and 11% for BNT162b2 and mRNA-1273, respectively. Negligible symptoms were reported by most infected health care workers, in both the control and intervention groups. Most infected participants had relatively high viral loads. For prevention of symptomatic disease, vaccine efficacy was estimated at 43 and 31% for BNT162b2 and mRNA-1273, respectively.

“A fourth vaccination of healthy young health care workers may have only marginal benefits,” the authors write. 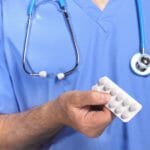