AD affects tens of millions of people worldwide, however, at autopsy an estimated 25% of patients with AD do not show underlying pathology, indicating a potential inaccurate diagnosis. Despite difficulties with diagnosis, early detection is essential for combating the effects of the disease.

In order to evaluate the accuracy of biomarkers and to identify novel related genes, researchers at Cardiff University in the UK sourced data from the Alzheimer Disease Cardiff Cohort (ADCC). Plasma samples were collected between 2004 and 2020 from 1439 patients with early and late onset sporadic AD and 508 control individuals. A single nucleotide polymorphism (SNP)-based association analysis was performed for plasma biomarkers.

These biomarkers could predict disease status with an area under the curve (AUC) of 0.74. On their own, the prediction accuracies AUC for Ab42 and P-tau181 were 0.66 and 0.65, respectively.

The prediction model using the biomarkers combined with previously associated genes had an AUC of 0.81.

The first genome-wide significant locus was on chromosome 7 and included the genes COPI coat complex subunit gamma 2 (COPG2) and testis specific 13 (TSGA13). This region has high linkage disequilibrium. The 2 lead SNPs in the region had high combined annotation-dependent deletion (CADD) scores (more than 12.37) which is indicative of being deleterious and one intergenic variant had a RegulomeDB (RDB) score (3a) indicating a functional impact on gene regulation.

The second genome-wide significant region was on chromosome 16 and contained the WW domain-containing oxidoreductase (WWOX) gene which has previously been linked with AD by genome-wide association study.

These findings should be confirmed among an independent dataset. 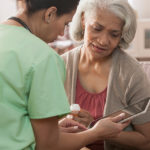