Post-irradiation vessel disappearance and the development of post-laser purpura are similar effective therapeutic end points for pulsed-dye laser (PDL) treatment of port wine stains, according to a study published in Dermatologic Therapy.

A total of 56 patients with port wine stains underwent PDL treatment consisting of 5 monthly PDL sessions (wavelength of 595 nm and a spot size of 10 mm). Patients were randomly assigned into a purpuric group (n=29) or a dermoscopic group (n=27). The investigators assessed the lowest duration of laser necessary to bring about dark purpura 24 hours after treatment administration and used that duration in later sessions. Patients in the dermoscopic group were also treated with the lowest irradiation dose that led to vessel disappearance; they underwent dermoscopic assessment after each dose.

Limitations of this study included the small sample size as well as the study’s single-center design.

Despite the similar efficacy of the 2 end points, the researchers concluded that post-irradiation vessel disappearance detected by dermoscope may be “more time-saving and more accepted cosmetically” than purpura. 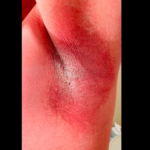 Case Study: Painful and Itchy Rash on the Face, Torso, and Armpits