Omalizumab is effective in 3 of 4 patients with normocomplementemic urticarial vasculitis (NUV), with higher total IgE levels and without extracutaneous symptoms, according to a letter to the editor published in The Journal of Allergy and Clinical Immunology: In Practice.

Treatment of NUV may be challenging as response to standard therapies is often poor, and because of the fact that long-term maintenance with immunosuppressants or systemic corticosteroids may not suitable. In this study, the investigators sought to characterize the effects and markers of response of omalizumab treatment in NUV.

The prospective, single-center, open-label, proof-of-concept study included 23 patients with NUV (mean age, 42.5 years; 87% female), with recurrent urticarial lesions persisting for >24 hours, who were enrolled at the Urticaria Center of Reference and Excellence in China between August and November 2019. A total of 56.5% of patients had extracutaneous symptoms, including joint pain, fatigue, exhaustion, and fever, with elevated baseline IgE levels (165.6 kU/L; normal reference range, <100 kU/L). All patients received a total of 3 doses of 300 mg omalizumab subcutaneously, each dose at the end of weeks 0, 4, and 8. Urticarial vasculitis activity score (UVAS) of 5 key urticaria vasculitis symptom subscores was used for the daily self-assessment of disease activity; the subscores included wheals, burning/pruritus, residual skin pigmentation, joint pain, and other general symptoms, each with a range from 0 to 10 per day, with 10 being the most severe. Nonresponders were defined as patients with <50% UVAS reduction. Changes in quality of life were determined by the Dermatology Life Quality Index (DLQI). The primary end point was the change in mean UVAS values from baseline to week 12.

Study results revealed that omalizumab treatment significantly reduced NUV disease activity, demonstrated by a reduction in UVAS from 4.5±1.1 at baseline to 1.9±1.4 at week 12 (P <.001). Furthermore, omalizumab significantly improved 4 of the 5 subscores by 12 weeks of treatment, with the exception being joint pain. In addition, reduction in disease activity and quality of life impairment in response to 12 weeks of omalizumab treatment were significantly correlated (r=0.767; P <.001). A total of 26.1% (n=6) of patients were nonresponders; compared with the responders, the nonresponders had lower baseline total IgE levels and higher rates of extracutaneous symptoms (293.2 vs 27.7 kU/L and 41.2% vs 100.0%; P <.001 and P =.019, respectively).

Overall 73.9% of patients demonstrated a positive response to omalizumab treatment, which was well tolerated with no serious adverse events observed.

Study limitations included the open-label design without a placebo control group, treatment at only 1 center, the small sample size, and the fact that relapse after omalizumab withdrawal and long-term safety were not systematically studied.

“A randomized, double-blind placebo-controlled trial should be designed to further confirm the findings. Future studies could explore the relevance of IgE in the pathogenesis of NUV and the mechanisms of action of omalizumab in this disease,” the investigators concluded. 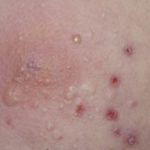