The use of a nonablative long-pulse 1064-nm Nd:YAG laser without anesthesia was effective for wart removal and was associated with negligible side effects, according to real-world experience study data published in the Journal of Cosmetic Dermatology.

In this study, a retrospective chart review of patients who underwent wart removal with the 1064-nm Nd:YAG laser from November 2016 to August 2019 (n=85) at a center in Slovenia was performed. None of the patients received anesthesia.

Before using the Nd:YAG laser, a scalpel or the Er:YAG laser was employed to first thin down patients’ thick and hyperkeratotic warts. Patients with thinner warts as well as a lower pain threshold underwent a Nd:YAG laser at lower fluence settings, but all warts received multiple pulses. After the procedure, patients were encouraged to use a moisturizer, but no specific aftercare dressing or ointment was prescribed. Patients underwent a checkup within 4 to 6 weeks after the procedure.

For each patient, the minimal follow-up period was 12 months, but some patients had follow-up that lasted up to 3 years. There were 17 patients who did not complete the laser treatments because they were either lost to follow-up (n=3) or continued with their other previous treatments in lieu of the laser approach (n=14). The mean treatment interval was 41 days between the first and second session and 60 days between the second and third session. Patients who completed treatment had a mean treatment interval of 51 days for all sessions.

Overall, the mean number of sessions required for full clearance of the warts was 2.2 (range, 1-7). During the procedure, the mean visual analogue scale pain score was 6 (range, 2-10). After the procedure, all treated lesions healed, and no major side effects were reported. There were 4 patients who reported blisters, and 14 patients who reported “slight pain” in the 2 to 3 days that followed the procedure. None of the patients reported scarring, hypopigmentation, or hyperpigmentation of the treated area.

Although the findings from this study are promising, the investigators wrote that further “randomized control trials comparing Nd:YAG laser with standard treatments are needed in order for this method to be recommended as a first-line treatment and therefore covered by insurance.” 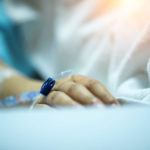 Sarilumab Linked to Faster Recovery in Severe COVID-19 With Hyperinflammation