Black women with frontal fibrosing alopecia (FFA) may present with earlier onset and have more rapidly developing disease compared with White women, investigators reported in a study published in the British Journal of Dermatology.

The retrospective analysis included White and Black women with FFA who were treated at a university dermatology department from 2007 to 2018, as well as 19 additional Black patients who were treated at a clinical research center from 2010 to 2020. A total of 140 patients were included—118 were White (median age at diagnosis, 63 years) and 22 were Black (median age at diagnosis, 53 years).

Black patients had a higher incidence of vertex/central involvement of the scalp (50% vs 27%; OR, 3.37; P = .015) and occipital involvement (25% vs 6%; OR, 5.29) compared with White patients. Black women also had higher rates of co-existing hair disorders such as central centrifugal cicatricial alopecia (CCCA), systemic lupus erythematosus, and alopecia areata, it was noted.

The finding that scale was more prominent in White patients may be owing to cultural differences, as Black patients are more likely to use oils and pomades on their scalps, potentially obscuring scale, noted the researchers.

“Importantly, hairline recession, a defining characteristic of FFA, was more common in Black patients,” stated the study authors. “Increased prevalence of hairline recession along with younger age at presentation and similar duration of hair loss in the Black cohort may suggest development of more severe clinical disease at a faster pace.”  This suggested to the investigators that treatment may need to be initiated earlier in this population.

Black patients may have a more robust inflammatory response as evidenced by a higher rate of itching and earlier onset of disease, and this response may lead to more widespread areas of scalp involvement, according to the researchers.

One study limitation is the small sample of Black patients.

The investigators noted that larger prospective studies are needed to further analyze the clinical characteristics of FFA as well as differences in treatment outcomes.

Disclosure: Some of the study authors declared affiliations with biotech, pharmaceutical, and/or device companies. Please see the original reference for a full list of authors’ disclosures. 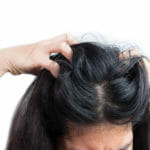