One case involved a 38-year-old male with alopecia universalis and recurrent CDI. After FMT, the patient experienced resolution of his CDI, but also reported new hair growth at a follow-up appointment 8 weeks later. He had previously received steroid injections to treat his alopecia but they had proven ineffective; he was not on any other treatment during the time of regrowth. Three years after FMT, he still reports hair growth on his arms, scalp, and face.

The second case involved a 20-year-old male with ileocolic Crohn’s disease and alopecia universalis. Five recurrent courses of antibiotics did not resolve his CDI but he became CDI-free after the FMT procedure. After transplantation, his hair loss improved from stage S4b alopecia (95–99% hair loss) to stage S2 (25–49% hair loss). Previous treatment with intralesional corticosteroid injections were ineffective and he only received two additional injections after FMT, which were administered to his scalp. However, after FMT he saw hair regrowth in not only his scalp, but other parts of the body as well.

Patients with alopecia areata, an autoimmune inflammatory condition of the hair follicle, currently have limited options when it comes to treatment. The outcomes of these cases suggest that FMT not only has an intestinal effect but can also produce a profound immunological response.

“Further study of gut microbiota in patients with autoimmune alopecia may elucidate disease mechanisms and provide evidence to support clinical trials of FMT in this population,” the authors conclude. 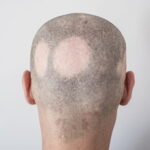