Researchers found that sodium hypochlorite has antimicrobial and antibiofilm effects against clinical Staphylococcus aureus isolates derived from patients with atopic dermatitis (AD). The findings were published in the British Journal of Dermatology.

The association between AD and increased susceptibility to skin infections, particularly S. aureus, has been well established. Of late, increased attention has focused on the presence and impact of S. aureus biofilms in patients with AD.

Skin biopsies were taken from an AD lesional area in patients with infected AD and were examined by scanning electron microscopy (SEM). The researchers used radial diffusion assays, biofilm assays, and confocal laser scanning microscopy to assess the effect of sodium hypochlorite on S. aureus isolates derived from the skin.

The results of SEM analysis revealed clusters of coccoid bacteria embedded in fibrin and extracellular substances at the skin surface. At concentrations between 0.01% and 0.08%, sodium hypochlorite demonstrated antibacterial effects against planktonic S. aureus cells.

The eradication of S. aureus biofilms in vitro was observed at concentrations ranging from 0.01% to 0.16%. These findings were confirmed by confocal laser scanning microscopy. The treatment of S. aureus biofilms with 0.04% sodium hypochlorite killed nearly all of the bacteria, whereas most of the cells in the untreated biofilms (ie, the controls) continued to exhibit evidence of live bacteria with intact cell membranes.

“From a clinical perspective, our findings suggest that the use of a higher concentration of sodium hypochlorite than currently used in bleach baths in the treatment of patients with infected AD would be more beneficial to combat S. aureus biofilms,” the researchers concluded.

The need exists for additional in vivo experiments designed to investigate the antibiofilm effects of sodium hypochlorite. Clinical trials that will determine the most advantageous concentration of sodium hypochlorite and thus help achieve the best clinical effects without causing skin irritation and/or hypersensitivity reactions are warranted. 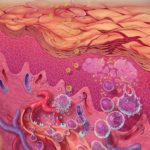