In pediatric patients with atopic dermatitis (AD), there is an association between disease severity and the risk for the development of cataracts, according to the results of a population-based, retrospective, longitudinal cohort study published in JAMA Ophthalmology.

The investigators sought to explore the association of AD with subsequent cataract development and cataract surgery in a Korean pediatric population. The analysis used nationally representative data from the Korean National Health Insurance Service database between 2002 and 2013. Incident cases of AD, which comprised patients age <20 with AD and severe AD, were matched with 4 control groups with no AD-related insurance claims each using propensity scores derived from gender, age, residential area, and household income.

Overall, the absolute risk for the development of cataracts was rare in pediatric patients both with and without AD after 10 years of observation; the risk for requiring cataract surgery was even rarer. Although cataracts are a manageable medical condition, physicians should closely monitor cataract development in children with AD, particularly children with a severe form of the disorder. 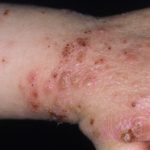