The investigators reviewed data from 101 patients with AD who were treated with dupilumab. Eligible participants were diagnosed with DFR after beginning dupilumab therapy since March 2020. DFR was defined as a paradoxical eruption (macules, papules, or plaques, with or without pustules) occurring after initiation of dupilumab therapy, in a head-neck distribution (seborrheic), which was different from their usual AD lesions, was not associated with another disease, and did not respond to topical corticosteroids or calcineurin inhibitors.

Owing to the seborrheic distribution of DFR in the participants, the study authors considered that the etiology was a hypersensitivity reaction to Malassezia.

Among the patients, 84.6% had DFR after 2 to 6 months, and 46.1% described their condition as mild and 46.1% as moderate. Severity AD scores ranged from mild to moderate when DFR was diagnosed.

“In this case series, we report for the first time in the literature in a cohort, the positive response to oral or topical antifungals for AD patients treated with dupilumab who developed DFR, supporting the Malassezia hypersensitivity theory,” concluded the study authors. 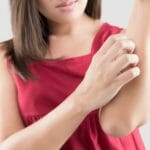 Pain in Patients With Atopic Dermatitis