Use of methotrexate predicts longer drug survival in children with atopic dermatitis (AD), according to research findings from a French study published in the British Journal of Dermatology. The study also found several other predictors of longer and shorter postdrug survival in children with AD who discontinued their first-line systemic immunosuppressive treatment (IST) and started a second-line therapy.

Children with AD (mean age, 11±8.7 years) who received ≥1 IST from 2008 to 2018 were included in a drug survival analysis (n=83). The event of interest in this analysis was IST discontinuation. Participants who discontinued first-line IST were included in a postdrug survival analysis, of which the main event of interest was the initiation of a second-line IST (n=39). All data were censored because of loss to follow-up or absence of event after 24 months.

In the children who were prescribed a second-line IST, the drugs included ciclosporin (n=10), methotrexate (n=13), dupilumab (n=13), mycophenolate mofetil (n=1), azathioprine (n=1), and acitretin (n=1). There was no difference between ciclosporin and methotrexate in the median drug survival for second-line IST (31.5 months [IQR, 8.5–78.3] vs 13.5 months [IQR, 5.5–50.1], respectively; P =.88). No significant difference was observed in terms of the median postdrug survival for ciclosporin and methotrexate (8.0 months vs 4.1 months, respectively; P =.58).

Limitations of the study included the small sample size as well as the inclusion of only children from France.

The study authors wrote that their findings “potentially illustrate a tendency to consider the methotrexate safety profile as identical for adults and children.” 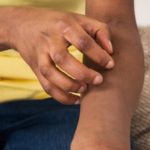