Filler injections with needles or cannulas are associated with a very low risk for intravascular occlusion events, researchers reported a study published in JAMA Dermatology.

The retrospective cohort study sought to determine whether filler-associated vascular occlusion events of the face occur more frequently with injections using needles than with microcannulas, when performed by board-certified dermatologists. Data relating to patients undergoing filler procedures in the dermatologists’ practices were obtained from August 2018 to August 2019. The primary outcome measure was intravascular occlusion, and occlusion events were graded by severity (no long-term sequelae, or occlusion associated with scar, ocular injury, or blindness).

A total of 370 dermatologists (mean [SD] years in practice, 22.3 [11.1]) participated and reported 1.7 million syringes injected. Among the participating dermatologists, 106 (28.6%) reported at least 1 vascular occlusion secondary to filler injection. The risk for occlusion with any particular filler type using needle or cannula never exceeded 1 per 5000 syringes injected. Overall, the researchers found 1 occlusion per 6410 with 1-mL syringe injections with needles and 1 per 40,882 with cannulas (P <.001).

“In this cohort study, filler injections with either needles or cannulas were associated with a very low risk of intravascular occlusion events,” stated the investigators. “Moreover, the vast majority of such events were minor and resolved without scar or other injury.”

“Overall, the study findings are useful in that they provide quantitative estimates of the risk of intravascular occlusion after injection of common prepackaged fillers,” the study authors commented. “Cannulas appear to be less likely to be associated with occlusions than needles…. While increased cannula use may further help mitigate the incidence of occlusive events, certain indications, anatomic locations, and patient needs may favor needle injection. Only the treating physician, after taking into account specific patient factors, can determine whether a needle or a cannula is most appropriate.” 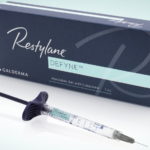