A 1064 nm Nd: YAG quasi long-pulsed laser treatment was safe and highly effective in improving acne in a case study of patients with moderate to severe acne. Findings from this case study were reported in the Journal of Cosmetic Dermatology.

A total of 19 patients with moderate to severe acne (mean age, 24.3±8.7 years) were included in this case series study. Affected areas were treated with the 1064 nm Nd: YAG quasi long-pulsed laser at 8 J/cm2 fluence and accumulated 1000 to 4000 kJ at 2-week intervals. Treatment was repeated at each interval until the patient achieved a minimal Acne Global Severity Scale (AGSS) score of between 1 (clear) and 2 (almost clear).

Patients attended a follow-up session at 8 weeks after the final treatment. Independent dermatologists used the AGSS scale before each treatment session and at the follow-up visit to assess acne severity. Patients assessed change in their condition on the Patient Global Impression of Change (PGIC), and patients also recorded their satisfaction with the treatment.

An average of 6.6 treatments were needed to achieve the minimal AGSS score of 1 to 2, according to the investigators. There was a significant reduction from baseline in the AGSS scores after only 2 treatment sessions (4.21±0.65 vs 3.05±0.83, respectively; P =1.63E-05). The significant reduction in these scores was sustained during the study. The investigators detected persisting minimal AGSS scores after the 8-week follow-up.

All patients were highly satisfied (2.9±0.5) with treatment. Patients had high PGIC scores (5.3±1) indicative of a “noticeable and of a real and worthwhile difference in appearance.”

Transient erythema was the only adverse event reported by some patients during the study.

Limitations of this study include the small sample size, the short duration of follow-up, as well as the lack of a control arm.

The investigators concluded that this “modality should be considered as a treatment option for future combinational therapy protocols,” including those that feature “either light-based technologies or radiofrequency (RF)-based modalities which feature skin texture-related properties.” 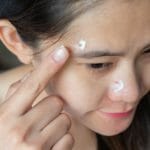 For Acne, Adapalene Plus Benzoyl Peroxide More Effective Than Either Alone