Acne commonly affects adolescents of both sexes, however, in the population of adults 20 years and older, acne is significantly more prevalent in women.1 Because of hormonal changes associated with pregnancy, acne develops in up to 42% of women during pregnancy.2 In fact, in a small number of women, acne appears for the first time during pregnancy, and in approximately one-third, the condition resurfaces.2

Treating acne is important for the overall health and well-being of expectant mothers. Research has shown that acne is not a trivial, cosmetic problem; rather, the condition has been associated with poor self-esteem and social impairment, and may contribute to the development of serious mental health problems such as major depression or suicidal ideation.3-5

However, pregnancy complicates acne treatment, because the use of topical retinoids has been associated with potential risk to the developing fetus.6,7 With health considerations of both mother and child set as the top priority, physicians treating acne in pregnant women are left with the difficult task of weighing the risks and benefits and choosing among limited treatment options.

Dermatology Advisor: What are some of the considerations that need to be taken into account when selecting a treatment for pregnant women with acne?

Yolanda R. Helfrich, MD: First, the acne must be evaluated. Is it mild and limited to a few areas, or is it more severe? Next, treatments with demonstrated safety must be selected. Physicians have more limited therapeutic options available when treating acne in pregnant women.

Dermatology Advisor: What are some of the common therapies used to treat acne in pregnant women?

Dr Helfrich: For mild acne characterized primarily by noninflammatory lesions, topical azelaic acid or benzoyl peroxide can be recommended as baseline therapy.8 For acne involving inflammatory lesions, starting with a combination of topical erythromycin or clindamycin with benzoyl peroxide is recommended. Moderate to severe inflammatory acne can be managed with oral erythromycin or cephalexin, which are safe when used for only a few weeks.8 A course of oral prednisolone no longer than a month may be useful for treating fulminant nodular cystic acne after the first trimester. In general, topical and oral antibiotics should not be used as monotherapy, but should be combined with topical benzoyl peroxide to decrease bacterial resistance.

Dermatology Advisor: Considering that safety data for drugs administered during pregnancy are limited because of ethical issues, on what are these treatment recommendations based?

Dr Helfrich: Most treatment recommendations are based on observational and animal studies.

Dermatology Advisor: What acne treatments are contraindicated for pregnant women or women who are planning to become pregnant?

Dr Helfrich: Topical retinoids are generally avoided in pregnancy and in women who are planning to become pregnant, primarily because systemic retinoids have been associated with birth defects. Pregnant women should absolutely not be treated with isotretinoin, as it has been associated with severe birth defects. Oral tetracyclines should also be avoided in pregnant women, as animal studies have revealed evidence of embryotoxicity and fetotoxicity, including toxic effects on fetal teeth and bone.

Dermatology Advisor: What are some of the underlying issues that complicate the management of acne in pregnant women?

Hillary E. Baldwin, MD, FAAD: The acne itself is generally no different than acne at any other time of life, although there are women whose acne gets worse, or better, during pregnancy under the influence of various hormones. The major difference in treatment concerns the possibility of teratogenicity for the baby. So, in my estimation, people become overly concerned about these medications, especially the topical medications. There is really no evidence that most of them are problematic at all, because they really have not been looked at (in this population). The medications themselves, with the exception of tretinoins, tetracycline, and spironolactone, are predominantly fine during pregnancy.

Dermatology Advisor: How is the risk-benefit ratio for acne treatment in pregnant women assessed?

Dr Baldwin: Clinicians are very different in this regard. What I think of these medications, as a dermatologist, is not nearly as important as what the obstetrician thinks. I can talk to the patient about the risks and benefits, but if the obstetrician says, “you should not use this during pregnancy, pregnancy is just 9 months long and just wait until you’re finished,” then that’s what they’re going to do, regardless of my recommendation. However, for most women, pregnancy is not 9 months long, because getting pregnant may have taken years, and after pregnancy there is a breast-feeding period. So, telling a young woman that she has to go without therapy for 4 or 5 years, based on no data, is a concern.

Dermatology Advisor: What are some of the potential consequences of not treating acne in pregnant women?

Dr Baldwin: In general, acne is a very devastating disease to many people and you cannot underestimate the psychological toll that it has on some. Especially when we are talking about pregnant women and postpartum depression. It is our obligation to do anything that we can do to make a pregnant woman feel better about herself and not cause her to [feel bad about herself].

Dermatology Advisor: How has the labeling of prescription drugs changed and what labeling system has replaced pregnancy categories A, B, C, D, and X?

Dr Baldwin: Everybody is still talking about categories A, B, C, D, and X because we know what these categories mean and how they were defined. However, the problem with the old system was that it was defined poorly and everything that has never been tested just got locked under category C. Since June of 2015, old medications have been allowed to keep their labels and get phased in gradually, while any new medications that come out have to use the new low-risk/high-risk classification system that actually explains the risks. This might be a little bit more difficult for the patients to understand than the old system. 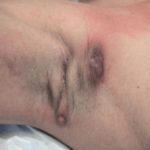