Low glycemic index (GI) and low glycemic load (GL) diets are associated with decreased insulin-like growth factor (IGF)-1 concentrations among adult men and women with moderate to severe acne, according to the results of a short-term, randomized controlled trial (ClinicalTrials.gov identifier: NCT02913001) published in the Journal of the Academy of Nutrition and Dietetics.

The investigators sought to explore changes in biochemical factors that are linked to acne in adults with moderate to severe acne after they followed a low GI and GL diet or their usual eating plan for 2 weeks.

A parallel, randomized controlled study design was used to compare the effect of a low GI/GL diet with that of a usual diet on such biochemical markers associated with acne as glucose, insulin, IGF-1, and IGF binding protein (IGFBP)-3, as well as insulin resistance, after 2 weeks.

A total of 66 individuals were randomly assigned to the low GI/GL diet group (n=34) or to the usual eating plan (n=32). Independent sample t tests were used to evaluate changes in biochemical factors related to acne, dietary intake, and body composition preintervention and postintervention, which compared the 2 types of dietary interventions.

The investigators concluded that according to the study findings, additional research of a longer duration is warranted to examine whether a low GI/GL diet would result in a clinically meaningful difference in IGF-1 levels that would lead to a reduction in the number of acne lesions and acne severity. Medical nutrition therapy may be a practical treatment option for patients with acne, based on the diet-induced endocrine effects on acne-promoting pathways described in this study. 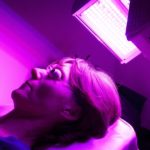 Seeing the Light: Dermatologists Weigh In on Light Therapy for Acne