For women with acne, treatment with spironolactone was effective in reducing severity and had few adverse effects, according to study data published in the Journal of the European Academy of Dermatology and Venereology.

For this study, the investigators collected data on women who were patients at the Department of Dermatology at the Mayo Clinic and were prescribed spironolactone to treat acne for at least 3 months for the period from January 1, 2007, to December 31, 2017. Patient health records provided information on demographics, concurrent therapies, treatment dose and duration, response to treatment, and adverse effects. Acne severity was classified using the 4-grade European classification system, and treatment response was classified by complete response, partial response >50%, partial response ≤50%, or no response.

Overall, 91.4% of the women experienced acne improvement with spironolactone, with 66.1% achieving complete response. These results were consistent regardless of acne severity. Adverse events occurred in 10.4% of the women, with the most common cited as dizziness, irregular menstrual bleeding, and fatigue.

Limitations of this study included its retrospective nature, the qualitative assessments of the women’s acne, the large number of clinicians providing treatment, the potential that women had their follow-up appointments at another clinic, and the possibility that some adverse events might not have been recorded in the health records.

With increasing evidence of bacterial resistance and the negative effects of oralantibiotics, the American Academy of Dermatology recommends the use of systemic antibiotics for only about 3 months, wrote the researchers. “As clinicians look for other medications to effectively and safely treat acne for longer periods, our study’s findings provide impactful and clinically relevant information for practicing dermatologists and their patients.” 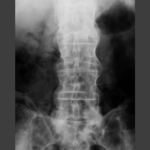 Incidence of Isotretinoin-Triggered Axial Spondyloarthropathy in Patients With Acne Vulgaris