OVERVIEW: What every practitioner needs to know

Are you sure your patient has an epidural hematoma? What are the typical findings for this disease?

Epidural hematoma (EDH) is an intracranial hemorrhage between the outer membrane of the brain (dura mater) and the skull, usually caused by trauma. The hematoma is most often caused by laceration of the meningeal arteries or their branches. However, in children the most likely etiology is venous bleeding from skull fractures in areas of rapid bone growth.

Typical locations for children are frontal, parietooccipital and posterior fossa. Clinical signs vary depending upon the age of the child. Classic symptoms are initial decrease in consciousness caused by the actual trauma, followed by a symptom-free interval. As blood accumulates in the epidural space, the child can deteriorate rapidly. Computer tomography (CT) typically demonstrates a biconvex and hyperdense lesion restricted by suture lines, often associated with a midline shift.

Prompt diagnosis and management are essential to avoid neurological deterioration and subsequent deficits.

Epidural hematomas occur most commonly after a head trauma, which may cause a temporary loss of consciousness or a coma. The trauma often involves the temporal lobe and leads to tearing of the middle meningeal artery; it can also occur from rupture of the anterior meningeal artery or the dural venous sinuses. The majority of cases are accompanied by skull fracture.

If the hematoma remains unresolved, potential complications include increased intracranial pressure (ICP), ipsilateral dilated pupil due to compression of the oculomotor nerve, and the Cushing response comprised of hypotension, irregular breathing, as well as bradycardia. EDH involving the posterior fossa often raises the ICP by obstructing the fourth ventricle outlets and causing hydrocephalus. In addition, cortical blindness may also be a presenting symptom.

What other disease/condition shares some of these symptoms?

Subdural hematomas (SDH) are associated with a slower onset EDHs due to the slower venous bleeding. Clinical signs may appear within minutes or may be as delayed as 2 weeks. The head computed tomography (CT) shows a hyperdense crescent-shaped lesion in acute SDH.

Subarachnoid hemorrhage (SAH) may present with variable symptoms. The characteristic features include a severe and sudden-onset headache, often described as “worst headache of my life”. The headache may be associated with a brief loss of consciousness, seizure, nausea, vomiting, or meningismus. On CT scan, blood is present in over 90% of the cases if imaging is performed in the first 24 hours.

What caused this disease to develop at this time?

Epidural hematoma is almost exclusively due to head trauma. The highest incidence occurs in adolescents and young adults. The temporal lobe is often involved, disrupting the sphenoid bone and tearing the middle meningeal artery as it passes through the foramen spinosum. This rupture leads to blood accumulation between the dura and the skull. The expanding hematoma resembles a biconvex lens on imaging studies. Increasing ICP secondary to blood accumulation ultimately leads to brain herniation and death, unless the compression is surgically released.

Although most cases involve arterial damage, disrupting one of the dural venous structures can also result in EDH. In this case, clinical deterioration may be gradual, corresponding to a slower accumulation of venous blood.

What laboratory studies should you request to help confirm the diagnosis? How should you interpret the results?

Head CT and/or brain MRI should be obtained initially. Lumbar puncture is contraindicated in a setting of acute bleeding and increased ICP. Supplementary laboratory studies should include a complete blood count and coagulation profile. These studies are essential to the management of EDH.

Various other studies may be necessary depending on the individual case. The Glasgow Coma Scale (GCS) is a useful tool to assess the neurological status of the patient; furthermore, in children aged 2 years and younger, the pediatric GCS is recommended.

Would imaging studies be helpful? If so, which ones?

Head CT is the imaging study most commonly used to determine the presence of an EDH, as it is both widely available and time-efficient. Epidural blood usually resembles a biconvex lens due to the firm dural attachments present at the cranial sutures (See Figure 1 and Figure 2.). Occasionally, heterogeneous foci of lower intensity may appear within an EDH and may indicate active extravasation of blood and require immediate surgical evaluation.

Up to 8% of EDHs are undetectable on a head CT, possibly due to severe anemia, severe hypotension, early scanning after trauma or venous bleeding. A head CT may not be sufficiently sensitive to detect a reduced blood volume. The laboratory studies previously mentioned, such as a complete blood count, can help determine if any of these scenarios apply. Furthermore, an EDH undetectable by head CT may be detectable with a brain magnetic resonance imaging (MRI) (See
Figure 3 and Figure 4.). The majority of EDHs are evident within 8-24 hours; therefore, they are usually detectable upon repeat imaging in the first day.

The volume of an EDH is correlated with clinical outcome and considered in the treatment planning. This measurement can be obtained from a head CT using the formula ABC/2, which estimates the volume of an ellipsoid lesion. A is the largest diameter of the hematoma on the CT slice with the greatest area of hemorrhage. B is the largest diameter 90 degrees to A on the same CT slice. C is the number of CT slices containing the hematoma multiplied by the slice thickness in centimeters. A single CT slice is included in C if the hemorrhage area is greater than 75% of the hematoma in the CT slice used in A; whereas, it is excluded if the area is less than 25% of the greatest area of hemorrhage.

Brain MRI may be supplementary or substitutive. MRI is most useful for detecting EDH at the vertex. The appearance of an EDH may evolve over time similar to a parenchymal hematoma. An acutely formed blood clot is hypo-intense on a T2-weighted MRI due to the presence of deoxyhemoglobin. During subsequent weeks, deoxyhemoglobin degrades to methemoglobin, which appears bright on both T1 and T2-weighted MRI. After several, with only hemosiderin deposits remaining, the blood clot becomes hypo-intense on the T1-weighted MRI.

Cerebral angiography may also be helpful to assess for any abnormal vascular lesions.

As with any other medical condition, a thorough history and physical exam are pivotal steps in making an accurate diagnosis.

Important features of history include head trauma, loss of consciousness, altered mental status (i.e. a change in behavior of the child as noted by the parents), headache, vomiting, irritability, and pallor. A symptom-free interval followed by rapid clinical deterioration is typical of a temporal EDH. With an EDH involving the posterior fossa, the abrupt deterioration may be preceded by dizziness and decreased coordination.

While examining infants aged 12 months and younger, a cephalohematoma may be palpable. The examiner must also look for any lateralizing signs such as hemiparesis, hemiplegia, and anisocoria (unequal pupils). The Cushing response is a sign of increased ICP and possible brain herniation.

If you are able to confirm that the patient has epidural hematoma, what treatment should be initiated?

Children who present with EDH are treated like trauma patients, and the initial assessment follows the “ABC rule” of advanced trauma life support: airway maintenance with cervical spine protection, breathing and ventilation, as well as circulation with hemorrhage control. Furthermore, children with GCS of 8 or less and with rapidly worsening mental status are intubated and ventilated to maintain pCO2 between 35 and 40 mmHg. Fluid resuscitation may be required to prevent hypotension.

In addition, the cervical spine must be immobilized while providing supplemental oxygen to keep saturation over 95 percent. If there are signs of herniation and increased ICP, hyperosmolar therapy is initiated with mannitol while elevating the head of the bed at an angle of 30 degrees. Mild hyperventilation, with PaCO2 at 30-35 mmHg, is recommended for children whose signs of herniation do not respond to mannitol.

Signs of increased ICP include altered mental status, seizures, pupillary changes, and vomiting. Headache and altered level of consciousness followed by pupillary changes and bradycardia are suggestive of an impending transtentorial herniation in children. Herniation through the foramen magnum is associated with downbeat nystagmus, bradycardia, bradypnea, and hypertension.

A follow-up head CT 4 to 6 weeks after surgical evacuation is strongly recommended to assess for any residual or recurrent hemorrhage. Children without subsequent neurological deficits may return to school within this time period. Depending on the child’s age and extent of bone damage, contact sports are allowed when the bone has sufficiently healed.

Occupational and physical therapies are indicated for children with residual neurological deficits. For children with iron deficiency anemia due to blood loss, iron supplementation is recommended.

What are the possible outcomes of epidural hematoma?

Children under the age of 5 years experience lower morbidity and mortality from EDH than older children or adults because their skull sutures are more flexible and able to accommodate an expanding EDH. The mortality rate associated with EDH in the pediatric population is 2 to 6% but is higher in children who present with a “lucid interval” because this apparent improvement can delay an accurate diagnosis and definitive treatment.

What causes this disease and how frequent is it?

EDH occurs in approximately 1-3% of closed head injuries in the pediatric population. Males are at least twice as likely to be affected. Etiologies vary according to age. EDH is rare in new-borns but may be associated with delivery by forceps or vacuum extraction. In infants and young children, a low velocity impact (i.e. a fall) is the most common mechanism of injury. Child abuse accounts for 6 to 18% of cases. In older children, motor vehicle collisions are the primary cause of EDH.

As described in the Monroe-Kellie doctrine, the overall volume of the intracranial compartment cannot change within the rigid skull with closed sutures. The pressure within the cranial vault directly depends on the volume and compliance of the brain parenchyma, cerebrospinal fluid (CSF), and blood. With an expanding EDH, the brain parenchyma, CSF, and venous blood are all displaced. Eventually this mass effect may result in brain herniation through the foramen magnum, which is fatal.

This pathophysiology may not apply to young children whose skull sutures remain open until 18 months of age and whose subarachnoid as well as extracellular spaces are relatively large; therefore, they can tolerate an expanding EDH better than older children and adults. Due to this capacity for large-volume intracranial bleeding, young children may become anemic before presenting with signs of increased intracranial pressure (ICP).

Spontaneously formed EDH is rare. In the pediatric population, potential etiologies include middle ear or sinus infection, complication of neurosurgical procedures (i.e. ventricular shunt placement), minor head trauma in children with coagulopathies such as hemophilia or thrombocytopenia, invasive skull tumor such as Langerhans cell histiocytosis or solid tumor metastasis to the skull, and sickle cell anemia with skull infarction.

Other clinical manifestationsthat might help with diagnosis and management.

Children with an EDH in an acute setting, with a GCS of 12 or lower, need to be seen by a neurosurgeon to evaluate the child for surgical intervention.

How can epidural hematoma be prevented?

Protective measures to prevent head trauma include helmets used in athletics and cycling, use of car seats, and public health measures that highlight responsibilites of parents and other child care providers to prevent non-accidental abusive head injuries. 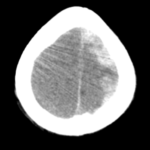