A young child, often with blond hair who is brought in by parents for “unusual appearing” hair.

Characteristic, unruly, hair that is difficult to style and has the appearance of standing away from the scalp. It is often “spangled” appearing (Figure 1). There is usually no increase in hair fragility/breakage. 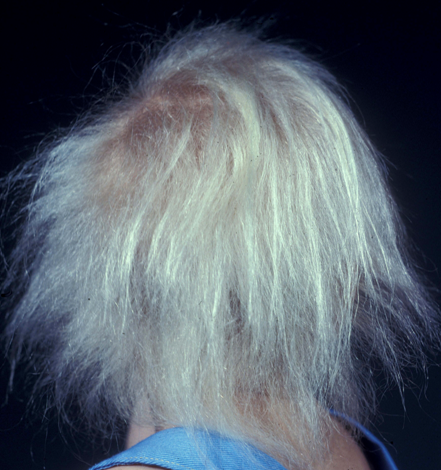 On light microscopic examination of mounted hair, the shaft may have a canal-like longitudinal groove along one or two facets; however this finding is subtle and difficult to detect.

When hair cross sections are examined (not an office procedure), the characteristic triangular or kidney- shaped appearance of the hair shaft is diagnostic (Figure 2).

The genetic basis of the disorder/etiology is unknown.

The irregular and changing shapes of the hair cross section prevent adjacent hairs from lying flat or forming locks, and this accounts for the stand away and spangled appearance. It has been suggested that a misshapen dermal papilla may alter the shape of the internal root sheath. Amino acid analysis and x-ray diffraction analysis of the hair is within normal limits.

Uncombable hair syndrome has also been reported to occur in the setting of other hair disorders such as alopecia areata, and loose anagen hair.

The hair should be trimmed to reduce its volume, and the use of a silicone-based leave-in conditioner may aid in managing the hair. The hair typically improves in appearance over time.

Smooth-tipped, wide-spaced combs or brushes should be used along with generous use of hair conditioners, detanglers, and silicone-based hair smoothers(typically sold under the category of anti-frizz products). Excessive brushing, heat, and chemicals should be avoided.

Biotin supplementation (5mg daily) has been reported to improve the appearance and manageability of the hair in a few case reports. The mechanism by which such treatment may improve the hair is unclear, and ultrastructural studies of hair post-treatment have failed to show any ultrastructural changes. However, since biotin supplementation is safe and not costly, a trial may be considered in affected patients.

The hair should be trimmed to reduce its volume, and the use of a silicone-based leave-in conditioner may aid in managing the hair. The hair typically improves in appearance over time.

Many consider the hair findings in the ectodermal dysplasias such as Rapp Hodgkin to be different to uncombable hair syndrome. Although the hair can be unmanageable in Rapp Hodgkin, it is often quite sparse and does not improve with age. Kidney shaped hairs (as well as a longitudinal groove) are usually seen in conjunction with torsion in Rapp Hodgkin, thus the term pili torti et canaliculi has been used by some to distinguish these hair findings from uncombable hair syndrome (pili trianguli et canaliculi).

Loose anagen syndrome has been observed in association with uncombable hair.

Lee, AJ, Maino, KL, Cohen, B, Sperling, L. “A girl with loose anagen hair syndrome and uncombable, spun-glass hair”. Pediatr Dermatol. vol. 22. 2005. pp. 230-3. (A 4 year old girl with features of loose anagen syndrome with uncombable hair is presented. The hair had an unusual ’bending’ that had not been previously reported.)

Kuhn, C, Helm, T, Bergfeld, W, McMahon, J. “Acquired uncombable hair”. Arch Dermatol. vol. 129. 1993. pp. 1061-1062. (Although usually seen in childhood, uncombable hair was observed in a 39 year old woman after she started to use sprionolactone. This condition may be seen as an acquired form in adults.)

Shelley, W, Shelley, E. “Uncombable hair syndrome: observations on response to biotin and occurrence in siblings with ectodermal dysplasia”. J Am Acad Dermatol. vol. 13. 1985. pp. 97-102. (A report on the benefits of biotin supplementation.)