Sebaceous hyperplasia (SH) is a common condition that primarily affects middle aged to elderly patients and increases in frequency with age. Although SH can be seen in neonates it is considered to be physiologic rather than pathologic. SH may be single or multiple in number and the most common locations are the forehead, cheeks and nose (Figure 1). Less commonly, SH can be found on the oral mucosa, neck, trunk, and genitalia. 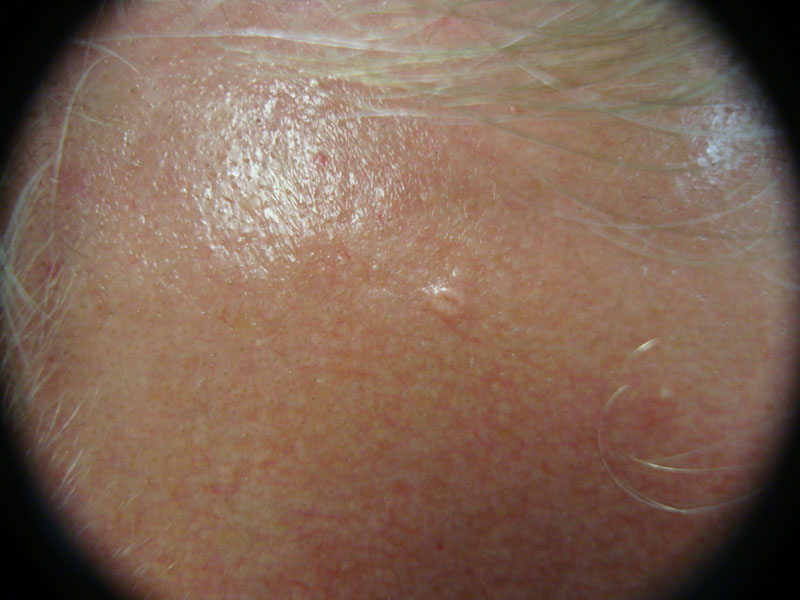 On physical examination, SH presents as a yellow white lobulated papule, often umbilicated at the central ostium/pore. On dermoscopy there are “crown vessels” that wind over the top of the yellow lobules, which are rarely branching and do not cross the center of the lesion (Figure 2).

The diagnosis of sebaceous hyperplasia is made clinically. If the diagnosis is questionable, a shave or punch biopsy can be done.

A biopsy is generally done to rule out a basal cell carcinoma or other sebaceous neoplasm. Dermoscopically (Figure 2) the differential diagnosis would include other yellow lobular-like structures including nevus sebaceous of Jadassohn and sebaceous adenoma. Distinction between these other entities can often be made clinically. Nevus sebaceous is often present at birth and grows rapidly at puberty. They often present as a yellow orange verrucous plaque on the scalp.

Histologically SH is characterized by 1 to 2 layers of germinative basaloid cells surrounding mature sebocytes. Several lobules empty into a single follicular infundibulum. Only one gland is hypertrophied; surrounding glands are normal, which would classify it most accurately as a hamartoma.

Sebaceous glands are found in association with hair follicles. There are areas commonly known to have ectopic sebaceous glands (unassociated with hair follicles) including the vermilion border of the lip (Fordyce spots), areola (Montgomery’s tubercles), labia minora, prepuce and mucosa of penis (Tyson glands). SH can occur in any of these locations and the biggest risk factor is increasing age. By mean age of 51 the incidence in several studies has been around 1% increasing to 26% by the mean age of 82.

There is a hereditary form passed in autosomal dominant fashion with onset during puberty that is found on the neck and trunk in addition to the face. Transplant patients on cyclosporine for immunosuppression have a higher incidence of SH as well. Furthermore, those transplant patients that develop SH are also at higher risk for non-melanoma skin cancer.

There is also a single case report of a patient who developed SH shortly after starting HAART (Highly Active Antiretroviral Therapy) for HIV. There is question whether these cases are effects of immunosuppression or medication direct effects. Cyclosporine is known to have direct effects on pilosebaceous glands with induction of acne and hypertrichosis.

The cause of sebaceous hyperplasia is unknown but likely develops as a consequence of aging, ultraviolet radiation, and immunosuppression or direct effect of medication.

Sebaceous hyperplasia is a cosmetic concern and therefore no treatment is needed. The risks and benefits of treatment must be understood and discussed with the patient. Treatment options are summarized in the Table 1.

Patients with sebaceous hyperplasia do not need treatment. Reassurance that the lesion is benign often suffices. If the patient desires removal or treatment for cosmetic reasons, there are multiple options as noted in the Table 1. Discussion of any treatment should include the fact that sebaceous hyperplasia may recur with any treatment modality and there is potential for scarring. Topical retinoids have few side effects, but results take months to years to realize.

Our approach is to start slowly for 6 months with tretinoin 0.025% cream and increase to tretinoin 0.05% over time. Consistency rather than strength may be better, though there is no study to validate that approach. Light hyfercation, cryotherapy, curretage, focal chemical peels.

Because salicylic acid is lipophilic, our preferred peel is a Jessner’s peel. These modalities are ideal for single or few lesions. For more widespread disease, photodynamic therapy, PDL and IPL (with or without aminolevulenic acid) are low risk options. They may require several treatments.

CO2 laser has been used in the literature, but is higher risk and similar long-term outcome with recurrence are still possible. Oral isotretinoin can be used and is effective. Due to the risk/ benefit association the authors would consider low-dose isotretinoin of 20 to 40mg daily, mostly at the lower range. None of the studies have long-term follow-up to know whether there is lasting remission with treatment. There are several cases that recurred after short-term isotretinoin courses. This would be the last resort for widespread or disfiguring disease because the risk of treatment outweighs the benefit in most cases.

No long-term management or follow-up care is needed for sebaceous hyperplasia.

Eisen, DB, Michael, DJ. “Sebaceous lesions and their associated syndromes: Part II”. J Am Acad Dermatol. vol. 61. 2009. pp. 563-78. (The first two are CME articles out of the JAAD that discuss sebaceous hyperplasia and other sebaceous lesions encountered in dermatology. They discuss the importance of recognizing sebaceous lesions, especially sebaceous adenoma and sebaceous carcinoma. The association with Muir-Torre is discussed, the pathologic stains MLH1/MSH2 for microsatellite instability and the need to screen for visceral malignancy.)

Richey, DF. “Aminolevulinic acid photodynamic therapy for sebaceous gland hyperplasia”. Dermatol Clin. vol. 25. 2007. pp. 59-65. (This paper reviews five articles in the use of ALA/PDT for sebaceous hyperplasia. The recommended incubation time is 1 hour to activate the ALA-induced PpIX with (in order of author’s preference) PDL, blue/IPL, yellow, and red light.)

Bader, RS, Scarborough, DA. “Surgical Pearl: intralesional electrodesiccation of sebaceous hyperplasia”. J Am Acad Dermatol. vol. 42. 2000. pp. 127-8. (The article describes the use of intralesional electrodessication at setting of 20 after local anesthetic with good results and lack of recurrence up to 7 months out from procedure for the treatment of sebaceous hyperplasia.)