Patients with scurvy may have a history of unusual or restrictive diets, particularly those deficient in citrus fruits. 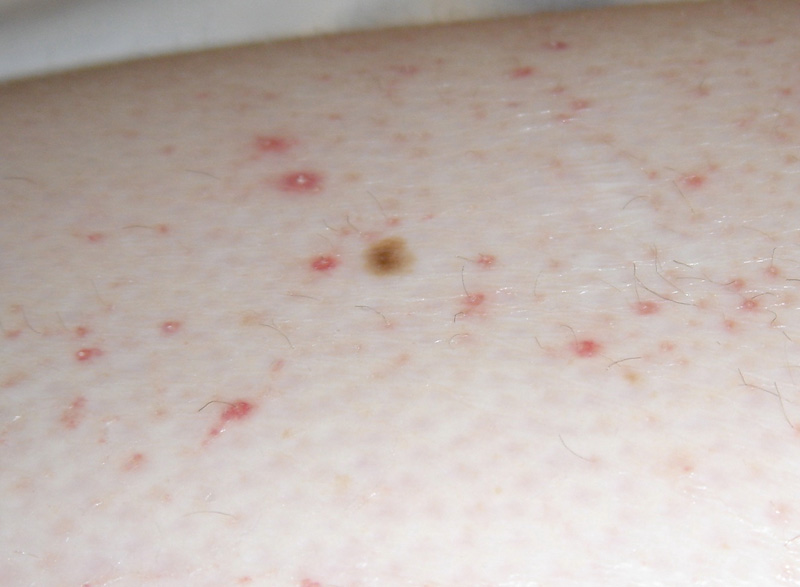 Bone pain is often a presenting sign in children. A scorbutic rosary may be present (thickening of the costochondral junctions of the ribs).

While the diagnosis is often evident from the clinical examination, confirmation can be obtained from a blood sample to obtain a plasma or leukocyte ascorbic acid level (2.5 to 5mg/L indicates depletion of stores of vitamin C; 0.1 to 2.5mg/L indicates deficiency; less than 0.1mg/L indicates severe deficiency and symptoms of scurvy are typically manifest).

Hess’ sign may be present: development of petechial lesions distal to the site of blood pressure cuff use to measure blood pressure.

Imaging studies of the long bones may reveal a pathognomonic sclerotic area near the metaphyses indicating scurvy (Wimberger sign). This widening of the zone of provisional calcification results from suppression of osteoblastic activity but while cartilage formation is decreased, mineralization continues leading to these changes. Periosteal elevation may also occur as a result of subperiosteal hemorrhage from capillary fragility as a direct result of ascorbic acid deficiency. “Ground glass” changes may be present in the epiphyseal areas.

Scurvy, as with other nutritional deficiency disorders, is associated with deprivation states, such as poverty, war, and famine.

Historically, scurvy as a disease has been known as early as 1550 BC. The Ebers papyrus describes onion as remedy for a condition resembling scurvy. Onions contain between 5 and 32mg of vitamin C per 100 grams onion. Hippocrates also reported on a condition consistent with scurvy characterized by “foetid breath, lax gums, and hemorrhage from the nose” (as quoted by the 18th century British physician James Lind).

Between the late 15th century through the mid-19th century during the so-called Age of Sail, seafarers were at particular risk for scurvy due to a lack of information about the causes of the disease and the inability to maintain stocks of fresh citrus fruits during long voyages. During this period, the mortality from scurvy was estimated to be about 50% among those aboard, and ship captains often doubled their staffing needs to compensate for anticipated losses. In fact, an estimated 2 million sailors died of scurvy during the Age of Sail and the mortality from scurvy exceeded deaths from storms, shipwrecks, warfare, and all other diseases combined.

Today, national rates of vitamin C deficiency are estimated around 7% in the United States.

Patient populations at special risk where vitamin C deficiency has been reported in association include:

– Patients with eating disorders, including those with anorexia nervosa with vitamin C deficiency resulting from globally restricted diets

– Patients after bariatric surgery (up to 34%) at 2-year follow-up in one study, due to problems of malabsorption

– Patients with liver transplantation have recently been reported to have vitamin C deficiency.

Vitamin C or ascorbic acid is not natively synthesized by human organisms because we lack the enzyme L-gulonolactone oxidase, which in other organisms allows native hepatic conversion of glucose to ascorbic acid.

Vitamin C is a necessary cofactor in the synthesis of collagen. It is involved in collagen polypeptide synthesis, post-translational hydroxylation, and specifically interacts as a cofactor for lysyl and prolyl hydroxylase.

Because collagen is a key structural protein for blood vessels, bone, and skin, deficiency of vitamin C resulting in impaired collagen synthesis manifests as problems in tissues containing collagen.

Vitamin C supplementation either intravenously (for severe cases) or orally (for mild to moderate cases) is advised. Once supplementation is completed, maintenance therapy is needed to prevent recurrence of the disease.

– Oral route is reasonable for mild to moderate disease.

– Intravenous route is necessary for those with gastrointestinal malabsorption.

RDA for Maintenance of Adequate Stores of Vitamin C (Food and Nutrition Board, Institute of Medicine)

Note: The average orange has about 70 mg of vitamin C.

Patients with scurvy due to degradation of vitamin C in those receiving chronic TPN:

– Ascorbic acid is degraded to dehydroascorbic acid, which is biologically inactive.

– To minimize problems related to depletion of vitamin C from oxidation within TPN bags, TPN should be placed in airtight, oxygen-impermeable containers, kept protected from light, kept refrigerated, and promptly dispensed.

Treatment responses are rapid and often remit within 24 hours of initiating therapy. Once vitamin C levels are repleted, symptoms often resolve within about a week of adequate repletion. Once symptoms resolve, maintenance therapy should be instituted.

Dietary maneuvers to incorporate foods containing vitamin C are often sufficient to maintain vitamin C stores. These include citrus fruits and green leafy vegetables such as broccoli and spinach.

While scurvy is caused by a deficiency of vitamin C, the causes of this deficiency are highly varied, and some detective work is often necessary to identify the underlying cause. Causes can be divided into:

Unusual scenarios that have been recently described in the literature were noted above and include:

– Children with autism-spectrum disorders who tend to have self-restricted diets, which often are lacking in foods rich in vitamin C

Bown, SR. Scurvy: How a surgeon, a mariner, and a gentleman solved the greatest medical mystery of the age of sail. 2003. (A wonderful historical recounting of scurvy during the Age of Sail, with a focus on the work of James Lind and other physicians who helped characterize the cause and treatment of scurvy.)