Poromas usually present as asymptomatic solitary lesions in the middle-aged or elderly. These lesions are typically located on palmar or plantar skin, but may occur in any area where eccrine glands are present. Clinically, a poroma is described as a sharply demarcated 2-12 mm papule or nodule, usually flesh or pink in color, though a pigmented variant has been reported (Figure 1). 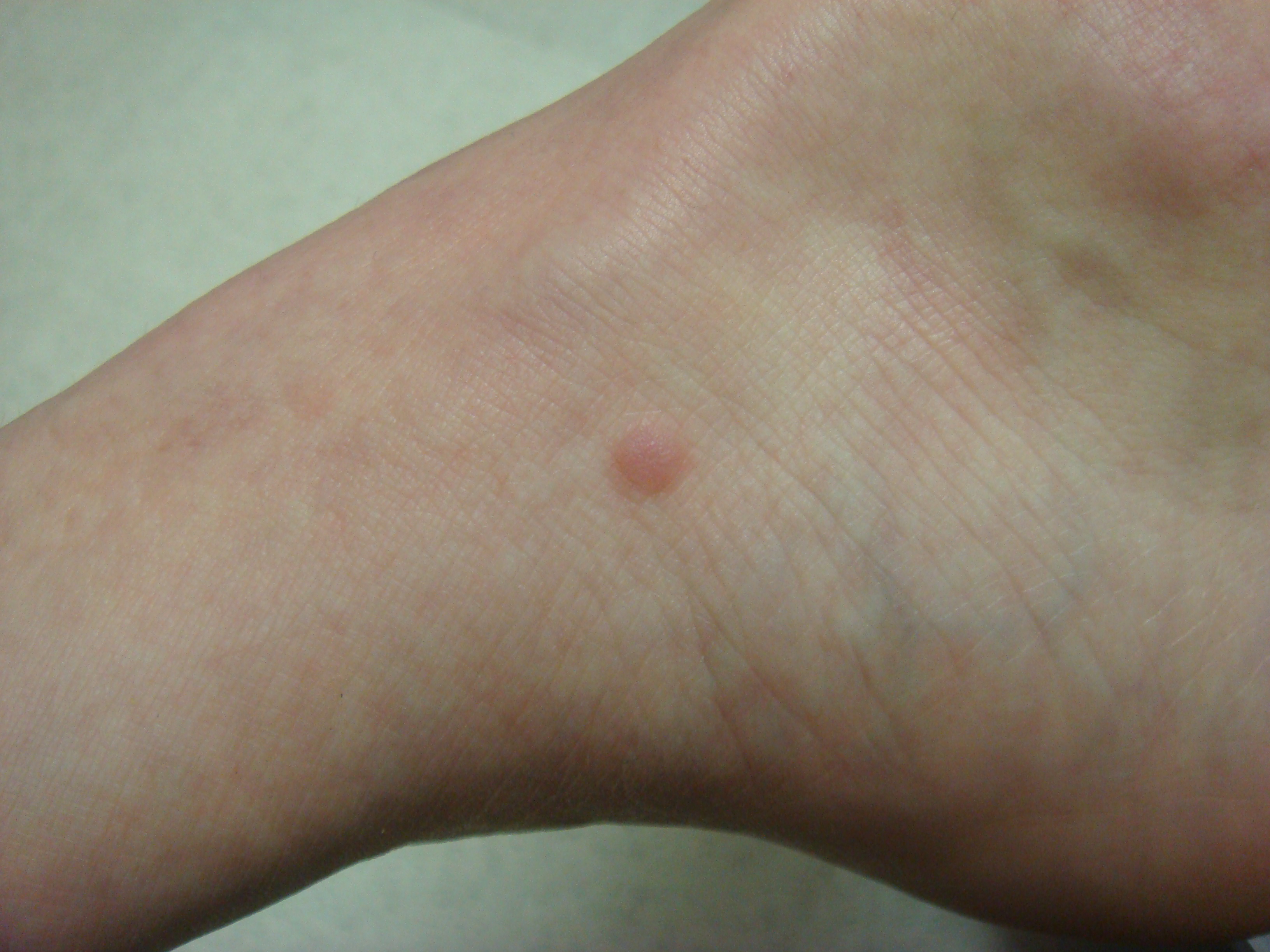 While poromas are commonly asymptomatic, it is important to inquire about a history of pain, bleeding, or pruritus as these qualities are more common with porocarcinomas.

Dermoscopic examination of a poroma reveals much variability including a white-to-pink halo around the vessels, glomerular vessels, linear irregular vessels, hairpin vessels, and/or multiple pink-white structureless areas. Unfortunately, since these findings are commonly seen in amelanotic melanoma, nonmelanoma skin cancer, and porocarcinoma, dermoscopic examination is of little diagnostic value for poromas.

Therefore, histopathologic examination is required for definitive diagnosis of poroma. Histopathology of poroma reveals a circumscribed tumor of uniform basaloid or poroid cells extending from the epidermis into the upper dermis with few pale larger cells and small ducts and/or cysts scattered within (Figure 2, Figure 3). The stroma is typically comprised of telangiectatic vessels.

Confirmation of a poroma diagnosis is dependent on histopathologic exam as described above. Variations in the histology have been reported.

Poromas with sebaceous differentiation have been described, showing scattered sebocytes among the poroid cells. This raises the question of apocrine differentiation in this subtype. While eccrine and apocrine glands have distinct functions, they both arise from downgrowths of the epidermis around the fourth month of gestation and therefore do have some common cellular precursors.

Poromas most commonly present in the middle-aged and elderly population with a reported average age of 68 years. Most studies do not show a difference in the incidence of poromas between genders or among races. There have been isolated case reports of poromas presenting in association with sites of trauma, chronic radiation dermatitis, or burn injury.

While there have been few associations with various types of trauma, the exact cause of poroma development is unknown.

Poromas typically present as solitary lesions and have no known systemic implications. Rare case reports have described multiple poromas, or poromatosis, but no systemic disorder has been definitively associated with this rare condition. There has been one case reported of poromatosis in a patient with hidrotic ectodermal dysplasia, but a clear association has not been determined.

Treatment options for poroma are summarized in Table I.

Since many malignant tumors are in the clinical differential of a poroma, biopsy and histopathologic examination is necessary for diagnosis. Unfortunately, if the biopsy is too superficial and the entire lesion including the base cannot be visualized. or there are secondary changes, there may still be a concern for the presence of malignant degeneration of porocarcinoma within the residual lesion. It has been reported that 18-50% of porocarcinomas appeared to have arisen in continuity with a preexisting benign poroma.

Considering the above, if a representative biopsy is performed and a diagnosis of poroma is determined, clinical monitoring for recurrence or malignant degeneration is the management approach of choice. If there is limited sampling of the biopsy specimen, or if the patient complains of symptoms such as bleeding, pain, or pruritus, there may be a concern for porocarcinoma. In this case, surgical excision in the treatment of choice. In making the decision on the management of a benign neoplasm by surgical excision, the location of the lesion, especially if acral, and the morbidity associated with such an excision should be taken into account.

There is a single case report in the current literature which reports successful treatment with topical 5% imiquimod cream (3 times each week for 4 weeks) of a solitary poroma on the face of a patient who refused surgery. Further studies with appropriate follow-up are necessary before using this therapeutic option as first-line treatment.

There have been isolated case reports of poromatosis, including one associated with hidrotic ectodermal dysplasia. Depending on the number of lesions present, excision of the many poromas in poromatosis may be impractical. Close clinical monitoring of these lesions is recommended.

Battistella, M, Langbein, L, Peltre, B, Cribier, B. “From hidroacanthoma simplex to poroid hidradenoma: clinicopathologic and immunohistochemical study of poroid neoplasms and reappraisal of their histiogenesis”. Am J Dermatopathol. vol. 32. 2010. pp. 459-68. (A thorough retrospective clinicopathologic review of poroid neoplasms and their immunohistochemical analysis with cytokeratin 10 (K10), K14, K77, and Ki67.)

Sawaya, JL, Khachemoune, A. “Poroma: a review of eccrine, apocrine, and malignant forms”. Int J Dermatol. vol. 52. 2014. pp. 1053-61. (A review of the clinical presentations, histopathologic findings, and treatment options of poroid tumors as well as the differential diagnoses.)