Poikiloderma of Civatte is a combination of linear telangiectasia, reticulate hyperpigmentation and slight atrophy occurring most commonly in sun-exposed areas, including the sides of the neck, lower anterior neck, and “V” of the chest (Figure 1). Poikiloderma typically spares anatomically shaded areas, such as the submental area. Its course is chronic, benign, but irreversible. Patients may complain of mild pruritus, burning or episodic flushing. 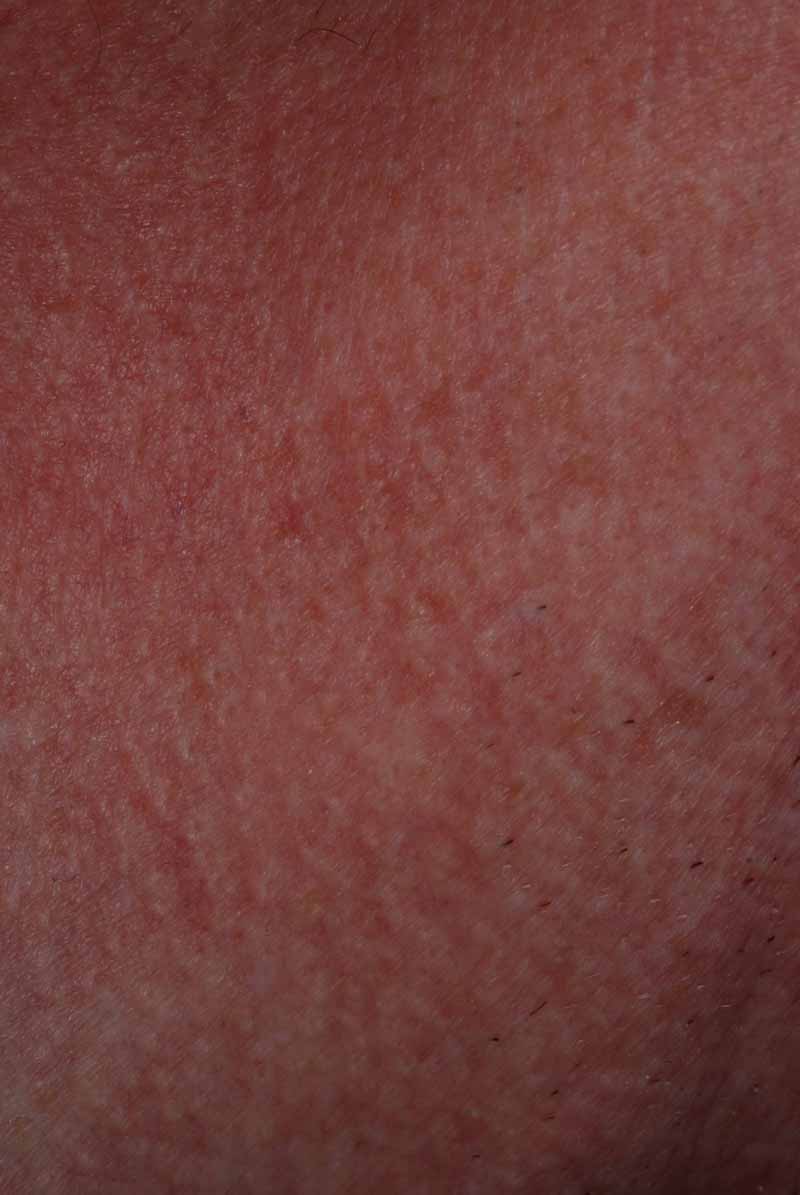 Other conditions in the differential diagnosis include poikiloderma of connective tissue disease and chronic graft versus host disease. These conditions can be ruled out on the basis of the patient’s history.

Poikiloderma of Civatte usually affects men and women in the fourth and fifth decade of life. Fair-skinned individuals are at an increased risk, especially those with a history of significant sun exposure. Postmenopausal females are more commonly affected.

The exact etiology and pathogenesis are unknown. Exposure to ultraviolet radiation is thought to be the main cause. Other implicated factors include genetic predisposition, menopause, and phototoxic or photoallergic reactions to ingredients in fragrances and cosmetics.

No systemic involvement or complications are seen with poikiloderma of Civatte.

Treatment is limited and focuses primarily on laser therapy (Table I).

Medical treatment for this condition is limited. Photoprotection with chemical and physical sunscreens may limit progression. Topical tretinoin, adapalene, and tazoretne can be used to limit the effects of photoaging. However, they only provide limited improvement in dyspigmentation observed with this condition and results are anecdotal. All three retinoids at all concentrations have shown anecdotal benefit.

Determination of which retinoid to use will be based on insurance coverage and tolerability. Tazarotene tends to cause the most irritation and adapalene causing the least. When using a retinoid to treat poikiloderma of Civatte, it would be best to start with a lower strength to ensure better tolerability and adherence.

Physical modalities are the main treatment option. However, it is difficult to achive complete clearance with these modalities as well. Unfortunately data is mostly anecdotal. Intense pulsed light (IPL) can target both the telangiectasias and hyperpigmentation. Various studies with IPL have reported clearance rates of up to 75% with 5% incidence of side effects including posttreatment erythema, swelling, mild purpura, and appearance of untreated stripes. One study reported three treatments sessions at 3-week intervals, although this may vary.

Fractional photothermolysis particularly improves the dyspigmentation while also targeting the vascular and textural components of poikiloderma of Civatte. One study used ablative fractional photothermolysis for one to three treatment sessions at 6-8 week intervals with significant improvement. Pulsed dye laser (PDL) has been used to primarily target the vascular component of these lesions. However, treatment is limited by purpura, mottled appearance, and scarring.

Altough poikiloderma of Civatte occurs in otherwise healthy patients, similar poikilodermatous changes can be associated with rare genodermatoses, including Rothmund-Thomson syndrome, Kindler syndrome, Cockayne syndrome, and dyskeratosis congenita. Additionally, if poikiloderma is observed in non-photodistributed areas, mycosis fungoides should also be considered in the differential diagnosis.

Tierney, E, Hanke, C. “Treatment of poikiloderma of Civattte with ablative fractional laser resurfacing:prospective study and review of the literature”. J Drugs Dermatol. vol. 8. 2009. pp. 527-34. (Prospective pilot study of 10 patients treated with an ablative fractioinated carbon dioxide laser (10,600 nm) for a series of 1 to 3 treatment session adminstered at 6- to 8-week intervals. The number of treatment sessions was determined by the degree of clinical improvement. Blinded physician photograph analysis was performed at 2 months postttreatment, which showed improvement in erythema/telangiectasia, dyschromia, skin texture, laxity, and overall cosmetic outcome.)

Rusciani, A, Motta, A, Fino, P, Menichini, G. “Treatment of poikiloderma of Civatte using intense pulsed light source: 7 years of experience”. Dermatol Surg. vol. 34. 2008. pp. 314-9. (Retrospective review of 175 patients treated at one center with intense pulsed light. Patients received three treatment sessions each session at 3-week intervals and were evaluated 3 months after the last treatment session. More than 80% of the vascular and pigmented components of poikiloderma of Civatte was observed with minimal side effects).

Behroozan, D, Goldberg, L, Glaich, A, Dai, T, Friedman, P. “Fractional photothermolysis for treatment of poikiloderma of Civatte”. Dermatol Surg. vol. 32. 2006. pp. 298-301. (Case report of one patient with poikiloderma of Civatte on the neck treated with a single treatment of 1,550nm Fraxel, SR laser. Significant improvement in degree of erythema, dyschromia and texture was noted 2 weeks after treatment by both patient and physician. Improvement was persistant at 2 months posttreatment.)

Katoulis, A, Stavrineas, N, Georgala, S, Katsarou-Katsari, A, Koumantaki-Mathioudaki, E, Antoniou, C. “Familial cases of poikiloderma of Civatte: genetic implications in its pathogenesis”. Clin Exp Dermatol. vol. 24. 1999. pp. 385-7. (Report of seven cases of poikiloderma of Civatte occurring among members of two Greek families, raising the possibility that genetic predisposition may lead to the development of this condition.)