Crusted scabies (also called Norwegian scabies) is a highly contagious variant of scabies in which there are thousands or even millions of mites, associated with psoriasiform scaling patches. The patient may complain of severe itching just as is seen in classical scabies, but more commonly, there is minimal to no pruritus. At least one review has contended that over 50% of patients with crusted scabies do manifest itching.

Characteristically, the appearance of crusted scabies differs from that of ordinary scabies. The patient may present with a generalized variably pruritic scaling eruption. Crusted scabies may occur anywhere on the body, particularly including the face and scalp. The lesions are psoriasiform plaques, often large and quite scaly, and may even be misdiagnosed as psoriasis. Although classical scabies in adults nearly always spares the scalp, in crusted scabies it is frequently involved, often with a psoriasiform, extremely hyperkeratotic, or grossly crusted morphology (Figure 1, Figure 2, Figure 3).

The condition most often is manifested as a psoriasiform dermatosis. It may also simulate seborrheic dermatitis, atopic dermatitis, and acquired hyperkeratosis palmaris et plantaris. There have even been reports of crusted scabies masquerading as dermatitis herpetiformis.

The correct diagnosis may be established by direct examination of the mites, ova, or scybala (Figure 4). The primary diagnostic study, as in ordinary scabies, is the microscopic examination of scrapings of skin to view the mite itself. Because mites in crusted scabies may number in the millions, they should be found easily. Classical burrows are usually absent or are hidden by the crusts. One technique for finding the mite is the examination of scrapings of subungual debris, obtained by clearing under the nail with a nail file, scales from the web spaces or retroauricular areas. Scales are best placed on a drop of mineral oil on the slide. Alternatively, the mineral oil may be applied to the skin and then scraped with a scalpel blade for transfer to the slide.

As noted in the section on classical scabies, recent reports have proposed using dermoscopy, videodermoscopy and even digital photography to demonstrate the mite. PCR has also been used to establish the diagnosis and is reported to revert to negative within 2 weeks of successful treatment.

Crusted scabies is most likely to affect individuals with a dysfunctional immune system, neurological diseases, the elderly or those with mental or other physical limitations. A patient with crusted scabies is frequently the index case for a severe outbreak of scabies in an institutional setting such as a hospital, nursing home or prison. There are also reported cases in health care facilities where the diagnosis was overlooked for prolonged periods while many residents and employees – as well as visitors to the facility – became infested.

People in contact with an individual with crusted scabies may complain of pruritus and develop excoriations on exposed areas; but they may not be infested themselves – the itching may be psychological. Still, such individuals should be treated just in case of early infestation.

Conditions reported to be associated with crusted scabies are listed in Table I.

The disease is caused by the human mite, Sarcoptes scabiei var. hominis. For the taxonomy of the scabies mite, see the article on Scabies. Immunosuppression, and diseases that result in altered immunity such as noted above, often contribute to the development of crusted scabies.

Crusted scabies is associated with secondary cutaneous infection. Data concerning morbidity and mortality are lacking. In one Australian study, the annual death rate for crusted scabies patients was nearly 4 1/2% , while after 1997 and the introduction of oral ivermectin therapy, it was reduced to 1.1% According to that study, deaths primarily occurred due to sepsis, or to the underlying disease that had led to the susceptibility of the crusted scabies.

Therapeutic options are limited, and include all of the topicals listed in the chapter on ordinary scabies (Table II).

Ivermectin 200mcg/kg (and 250mcg/kg has also been reported); generally, this dosage is repeated 1 week later. Combination therapy is also wise (See Optimal Therapeutic Approach. Outside the United States, treatment has also been reported with members of the benzimidazole group. This group includes albendozole, fenbendazole, oxfenbendazole, mebendazole, and thiabendazole, all of which are broad-spectrum antiparasitic agents used against a wide range of nematodes and cestodes. Albendazole and thiabendazole have both been reported to be effective for crusted scabies, but it would be premature to recommend their use at this time.

Single treatment with any of the above is often inadequate and unsatisfactory.

The treatment of crusted scabies begins with permethrin 5%, but it may be necessary to begin with the use of keratolytic agents such as 5 to 10% salicylic acid or 40% urea ointment to remove the thick crusts. In that case, the topical scabicide would be repeated on 2 consecutive nights, repeated weekly for as much as 3 weeks. As alternatives to permethrin, gamma benzene hexachloride, benzyl benzoate where available, crotamiton, or malathion may be used. Repeated applications of these drugs are also invariably necessary, and I recommend treatment on 2 consecutive nights for 2 to 3 consecutive weeks. Special attention should be paid to treating the distal fingers and toes, to reach the hyperkeratotic material beneath the nails, the scalp and all skinfold areas, from the retroauricular areas to the intergluteal area.

As recently as the early 1990s, gamma benzene hexachoride was the treatment of choice. Concern with the toxic effect of absorption has resulted in its reduced use in the United States, but it is an effective second-line drug, especially in adults.

Oral ivermectin has been proven to be very effective and I now consider it the treatment of choice for crusted scabies. Although some authors indicate that ivermectin is contraindicated in pregnant women and children under 15kg, there are numerous reports in the literature where that drug was used to treat entire villages for onchocerciasis, and there appeared to be no problems with the infants born to mothers treated with ivermectin during their pregnancy. I would always treat with the combination of ivermectin and one of the topicals.

Fomites may be more of an issue with crusted scabies than with the common type, due to the large number of organisms and the number shed. Sheets, pillowcases, garments all should be laundered, dry cleaned or pressed with an iron, or stored in a dry environment for at least 72 hours, beyond the point of viability of the shed mites.

In the case of pregnancy, or pediatric patients under 15kg, the physician faces the dilemma of treating with a systemic drug that is contraindicated, or using only topicals, which may not be effective. I would recommend the repeated use of more than one topical, of which permethrin should always be used first. 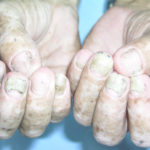