Cowden syndrome features multiple facial, acral and mucosal papules, as well as mucosal and especially genital pigmented macules. The facial lesions often appear verrucous while the lip and mucosal lesions are smooth and usually white. The acral papules are generally flat-topped, while the palmoplantar lesions are small hyperkeratotic plugs (Figure 1); 99% of patients will have mucocutaneous lesions by the third decade. 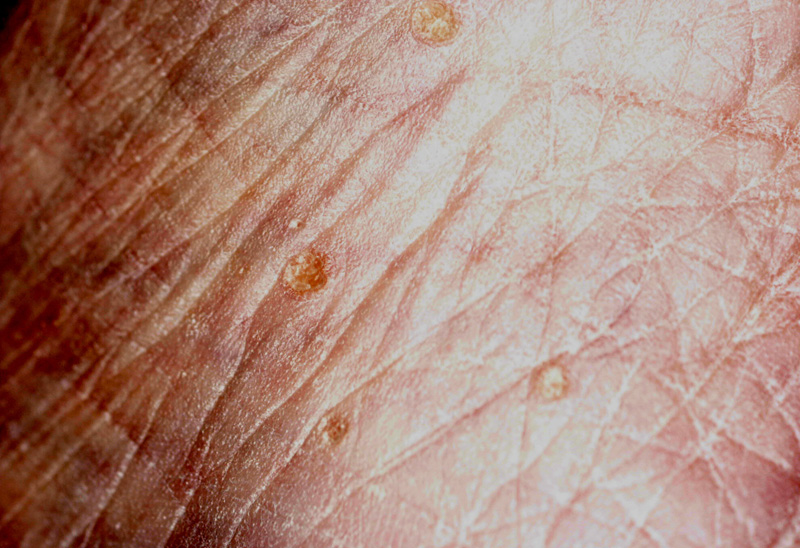 Many other syndromes are included under the overall heading of PTEN hamartoma tumor syndrome because they all have mutations in the tumor suppressor gene phosphatase and tensin homologue (PTEN). Not surprisingly, there are overlapping features. Bannayan-Riley-Ruvalcaba syndrome itself includes several other disorders; it features macrocephaly, hamartomatous intestinal polyps, lipomas, and pigmented genital macules. Patients with Lhermitte-Duclos syndrome have macrocephaly and cerebellar dysplastic gangliocytomas. Finally rare patients with some features of Proteus synxdrome may fall into the spectrum.

Dermatopathology: The facial papules are often trichilemmomas, which are benign clear-cell follicular tumors. On many occasions multiple biopsies and sections are required to find a classic trichilemmoma; often the papules simply show dermal fibrosis or follicular remnants. There is some evidence that human papilloma virus (HPV) may play a role in the formation of some trichilemmomas, but a convincing connection between HPV and Cowden syndrome has not been established.

Larger oral or cutaneous lesions may show a peculiar pattern of fibrosis described as resembling the cut surface of an onion. They have been designated as sclerotic fibromas or storiform collagenomas. While sclerotic fibromas were initially considered pathognomonic for Cowden syndrome, similar changes are not uncommon in dermatofibromas, so the lesions are no longer considered potential syndrome markers. The smaller acral and palmoplantar keratoses show hyperkeratosis without evidence for HPV infection such as koilocytes. The lipomas and vascular lesions are not usually biopsied, but are identical to sporadic tumors of the same sort.

Cowden syndrome can be diagnosed if an individual meets any of the following:

–Six or more facial papules, at least three of which are trichilemmomas

–One major and three or more minor criteria

–If one family member has Cowden syndrome, then the diagnostic criteria are loosened so that one major or two minor criteria suffice. If a patient has just cerebellar findings and macrocephaly, Lhermitte-Duclos syndrome is diagnosed. If additional findings are present, then Cowden syndrome is preferred.

Because of the pleomorphic aspects of Cowden syndrome and the vast spectrum of PTEN hamartoma tumor syndrome, the differential diagnostic considerations are enormous. A few of the common scenarios involving dermatologists include the following:

–The facial lesions look very similar to the fibrofolliculomas in Birt-Hogg-Dubé syndrome and to the angiofibromas in tuberous sclerosis and MEN1, as well as to other disorders with multiple adnexal neoplasms such as Brooke-Spiegler syndrome with trichoblastomas/trichoepitheliomas. Multiple biopsies may provide histologic clues to separate the disorders, but usually the overall clinical picture provides the answer.

–Cowden syndrome and especially Bannayan-Riley-Ruvalcaba syndrome can be confused with neurofibromatosis-1 because of the presence of café-au-lait macules and cutaneous tumors.

–The palmoplantar keratoses in Cowden syndrome can be confused with the pits in nevoid basal cell carcinoma syndrome (Gorlin syndrome); these patients also have macrocephaly so the early clinical separation is difficult unless basal cell carcinomas or other associated findings are present.

In most instances, when the entire clinical picture is reviewed, the diagnosis becomes clear. In some early cases, genetic analysis is needed to make the diagnosis.

Cowden syndrome is a rare disease affecting less than 2000 people in the United States. Its prevalence is estimated at 1:200,000.

Cowden syndrome is caused by mutations in PTEN andinherited in an autosdomal dominant fashion, so that children of anaffected patient have a 50% chance of inheriting the syndrome. Over 80%of individuals have identifiable mutations in this gene.

PTEN isa dual-specificity phosphatase that can dephosphorylate protein andphospholipids substrates. Its main tumor suppressor activity is tofunction as a negative regulator of the AKT pathway via PIP3. It is alsointimately involved in controlling the cell cycle and cell migrationvia the MAPK pathway and cyclin 1. There are few if any tumor suppressorgenes involved in so many different cell control pathways.

Cowden syndrome has many systemic implications, and if one includes the entire spectrum of PTEN-related tumors, the situation becomes exceedingly complex. We will only consider a few of the problems regularly seen in classic Cowden syndrome.

Macrocephaly: Found in up to 75% of patients, macrocephaly is the most common presenting feature of Cowden syndrome in childhood. It may be associated with mental retardation. The cerebrospinal fluid (CSF) pressures are normal.

Breast disease: About 70% of women with Cowden syndrome have fibrocystic breast disease; some have virginal hypertrophy of the breasts. The lifetime risk for carcinoma of the breast has been estimated between 25% to 50%; tumors are usually identified in the fifth decade but appearance in puberty has been recorded. Men are also at increased risk, but their risk is lower than that of women.

Endometrial disease: Benign uterine fibroids are more common than in the general population. The risk for endometrial carcinoma is around 5% to 10%.

Cerebellar disease: Cerebellar dysplastic gangliocytoma in adults is pathognomonic of Lhermitte-Duclos syndrome and may occur in patients with otherwise typical Cowden syndrome. Presenting features are headache and cerebellar dysfunction; the tumors are generally benign but many patients suffer from the residua of the required surgery. The same tumor in children is often not associated with PTEN mutations.

Hamartomatous gastrointestinal polyposis: The relationship of PTEN hamartoma tumor syndrome and juvenile polyposis syndrome is confusing. The polyps in Cowden syndrome are hamartomatous, usually few in number and generally asymptomatic. There is not an increased risk of colon carcinoma.

The cutaneous management of Cowden syndrome is straight-forward. Any large or disturbing mucocutaneous papules or nodules can be excised. For the multiple smaller lesions, laser ablation with a CO2 laser (10watt, spot size 2mm, continuous mode) or erbium:YAG laser (4 to 5J/cm2) may produce temporary improvement but recurrence is almost inevitable. Older ablative methods such as dermabrasion or curettage and cautery carry a much greater risk of scarring. The pigmented genital lesions are best left untreated to avoid scarring (Table II).

The systemic malignancies are treated just like the corresponding sporadic tumors. The breast, thyroid and endometrial carcinomas require surgery and then often some consolidation therapy. An intestinal polyp that is symptomatic (usually bleeding) can be excised.

The cerebellar dysplastic gangliocytomas must be excised. There is no treatment for the macrocephaly.

Patients in whom the diagnosis is suspected should be offered genetic testing and counseling. If the diagnosis is confirmed, the family members at risk should also be tested and counseled. The majority of the patients represent new mutations. Cowden syndrome is so protean and underdiagnosed that no reliable estimate is available for the percentage of patients with one affected parent, but it ranges from 10% to 50%. If Cowden syndrome is suspected, family investigation is always worthwhile. Prenatal genetic analysis is possible if a specific mutation has been identified in one parent.

Detailed recommendations are available for monitoring the patients with the goal of detecting the systemic malignancies as soon as possible:

–Annual breast examination starting at age 25 or 5 to 10 years before the earliest breast cancer diagnosis in the family.

–Annual mammography and breast MRI at age 30 to 35 or 5 to 10 years before the earliest breast cancer diagnosis in the family.

–Consideration of bilateral prophylactic mastectomy, especially in women with virginal hypertrophy of the breasts, which makes detecting tumors more difficult.

–Men should also perform monthly self-examination of the breasts.

–Baseline thyroid ultrasonography at age 18 or 5 years before the earliest thyroid cancer diagnosis in the family.

–Thereafter either annual clinical examination or annual imaging, depending on baseline results.

–Pre-menopause: Annual blind suction biopsies starting at 35 to 40 years or 5 years before the earliest endometrial carcinoma diagnosis in the family.

–Baseline colonoscopy after 50 years, unless symptomatic earlier. Then routine follow-up.

The dermatologist may be involved because the patient has mucocutaneous lesions suspicious of Cowden syndrome but histologic examination has failed to reveal trichilemmomas or sclerotic fibromas. Remember that neither is specific and that multiple biopsies are needed.

The monitoring must always be adjusted for the peculiarities of the family, if a pedigree is available. One must look harder and earlier for tumors that have been encountered in relatives, especially those appearing at an early age. Cowden syndrome and the PTEN hamartoma tumor syndrome are so pleomorphic that it is best to assume that any complaint might be related to PTEN until proven otherwise.