Patients generally present with neurologic impairment; ie, ataxia, since the first months of life. Truncal ataxia (oscillations of the trunk) may be evident at the 5th-6th months of life, while gait ataxia appears when the affected child starts to walk, with frequent falls. Oculomotor apraxia (slow or absent voluntary eye movements) is evident from the second year of life. Neurodegeneration is progressive, leading the patients to a wheelchair in the second decade of life (Figure 1). 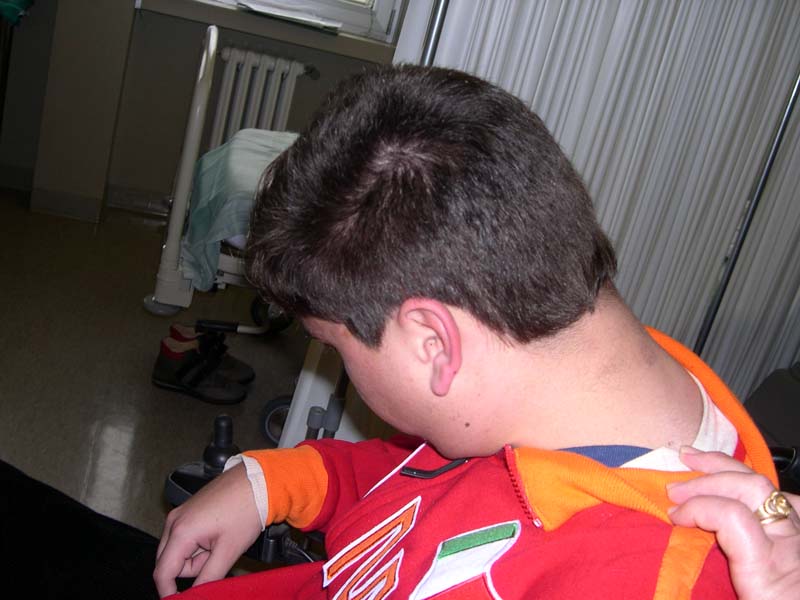 Many patients (around 70%) suffer recurrent sinopulmonary infections, leading most of them to death in the teens. The second cause of death is the occurrence of T-cell leukemia or lymphoma or, more rarely, solid tumors. The dramatic radiohypersensitivity associated with this disease makes antitumoral treatments difficult, so that attenuated protocols are generally used.

The second hallmark of the disease is the presence of oculocutaneous telangiectasias (Figure 2), present in more than 90% of patients. Cutaneously, café-au-lait spots, granulomas, hypo- and hyperpigmented areas as well as early greying hairs are often noticed. A progeroid aspect is characteristic of many patients.

The diagnosis is supported by high levels of serum alfafetoprotein and an increased rate of chromosomal breakage, both spontaneous and induced by gamma radiations and radiomimetic drugs, and by the absence of ATM protein (as shown by Western Blot analysis). Nuclear magnetic resonance imaging (NMR) demonstrates a nonspecific cerebellar atrophy, involving the vermis and/or the hemispheres, and the enlargement of the fourth ventricle.

Confirmation of the diagnosis is sometimes difficult in patients with a milder phenotype; differential diagnosis compared with AT-LD (ataxia Telangiectasia-like disorder), AOA1 and AOA2 (ataxias with oculomotor apraxia type 1 and 2 (AOA1, AOA2) is primarily done in the laboratory on the basis of a multiple Western blots done with the specific antibodies. The molecular analysis of the ATM gene, performed by denaturing high-performance liquid chromatography (DHPLC), direct sequencing and/or multiplex ligation-dependent probe assay (MLPA), gives the definitive confirmation of the diagnosis.

Ataxia telangiectasia is caused by biallelic mutations in the ATM gene

The ATM gene is a controller of the cell cycle and of the cellular response to oxidative stress and to DNA double strand breaks, the most toxic lesions of DNA. Absence of ATM protein leads to dysregulation of the cell cycle, no repair of DNA lesions, and an increased rate of chromosomal damage.

Ataxia Telangiectasia is a multisystemic disease with neurologic, immunologic and endocrine features. The most striking complication is the recurrence of sinopulmonary infections, due to immunodeficiency and /or difficulty in deglutition, causing aspiration (ab ingestis pneumoni). Periodic infusion of immunoglobulins and constant physiotherapeutic support could delay the consequences of these defects.

The prevention of the primary manifestations of the disease has been so far unsuccessful. Symptomatic therapies with minimum or null effects have been attempted in past years. Recently, few patients have been shown to be responsive to corticosteroid therapy. Therapeutic trials with beta- and dexa-methasone are now in progress to enlarge the number of the treated patients and to find the optimal dosage that could reduce the collateral effects of prolonged corticosteroid administration.

Patients must constantly undergo physiotherapy, especially to relieve respiratory problems. Hyppotherapy is also fruitful, especially to ameliorate the ataxic posture. Wheelchairs are necessary by 10-12 years of age in patients with the classical, severe form of the disease.

Follow-up of patients is compulsory for both neurologic and immunologic problems. Nevertheless, due to the absence of an effective therapy, progressive cachexia is unstoppable. If malignancy is present, attenuated therapeutic protocols must be used.

In recent years, the number of patients diagnosed in adult age has increased, due to the refinement of diagnostic instruments. These patients have a late onset (at least after puberty) of neurologic features, starting generally with periferic involvement (hypotonia, tremors, chorea).

Ataxia becomes evident years after the onset and could remain mild for years, allowing a quite normal life and also reproduction. Considering the mild phenotype, a dosage of serum alfafetoprotein is in our opinion compulsory in all adult patients with idiopathic ataxia and negative molecular results with respect to the other forms of adult ataxia.

In classical patients, the amelioration of quality of life has in the last two decades prolonged lifespan; as a consequence , the number of AT patients suffering tumors is increasing and solid tumors (meningioma, breast and gastric carcinomas, etc) are frequently described. Oncologists must be careful aware in the treatment of these patients, using attenuated protocols as well as reducing the amount of radiological analyses.

Lavin, MF, Shiloh, Y. “The genetic defect in ataxia-telangiectasia”. Ann Rev Immunol. vol. 15. 1997. pp. 177-202. This article is a detailed review of the genetic defect in ataxia telangiectasia and its role in he chromosomal instability and radiosensitivity so characteristic of this disease, emphasizing the insights into the nature of the defect provided by the recent identification, by positional cloning, of the responsible gene, ATM.)

Leuzzi, V, Elli, R, Antonelli, A, Chessa, L, Cardona, F, Marcucci, L, Petrinelli, P. “Neurological and cytogenetic studies in early-onset ataxia-telangiectasia patients”. Eur J Pediatr. vol. 152. 1993. pp. 609-12. (The clinical diagnosis of AT is difficult before the age of 4 years. The authors report clinical and cytogenetic data on three early-onset, early-diagnosed AT patients at the age of 12, 18 and 22 months, respectively.)

Louis-Bar, D. “Sur un syndrome progressif comprenant des télangiectasies capillaires cutanées et conjonctivales symmetriques naevoides et de troubles crerebellaux”. Confin Neurol (Basel). vol. 4. 1941. pp. 432-42. (The first description of patients with AT was published by Syllaba and Henner in 1926. They reported three adolescent Czech siblings with progressive choreoathetosis and striking ocular telangiectasia as having a variant of Ramsay Hunt’s familial double athetosis. In 1941, a second clinical description was published by Louis-Bar, regarding a 9-year-old Belgian boy with progressive cerebellar ataxia and extensive cutaneous telangiectasia distributed in nevoid patches; neither family history nor pathologic studies were reported. The author identified the syndrome as a previously undescribed entity belonging among the phakomatoses, either a variant of the Sturge-Weber syndrome or a separate new entity.)

Savitsky, K, Bar-Shira, A, Gilad, S, Rotman, G, Ziv, Y, Vanagaite, L. “A single Ataxia Telangiectasia gene with a product similar to PI-3 kinase”. Science. vol. 268. 1995. pp. 1749-53. (The ATM gene, which is mutated in the autosomal recessive disorder ataxia telangiectasia [AT], was identified by positional cloning on chromosome 11q22-23. The discovery of ATM enhanced understanding of AT and related syndromes and may allow the identification of AT heterozygotes, who are at increased risk of cancer.)