There are three types of anthrax: pulmonary, gastrointestinal, and cutaneous. Cutaneous anthrax occurs when spores enter a cut or break in the skin. Symptoms usually occur within seven days. Initial symptoms of cutaneous anthrax may include “flu-like” symptoms, such as a low-grade fever and general fatigue. Lymph nodes may swell. A boil-like lesion that eventually develops an ulcer with a black center will form on the skin. If symptoms do not develop within 2 weeks of exposure, there is only a remote chance of developing cutaneous anthrax disease.

Anthrax infrequently affects humans. However, the 2001 terrorist dissemination of anthrax in powder form throughout the United States mail increased attention to this disease. This attack resulted in disease in over 20 individuals, and resulted in several deaths.

In 2001, the American Academy of Dermatology developed a Cutaneous Anthrax Management Algorithm. For suspicious lesions, the following observations were made:

The highest suspicion should be given to those lesions where the patient had a known or highly suspected exposure to anthrax. However, as some of the recent cases have demonstrated, no known exposure had occurred when the patients presented for care.

After an incubation period of approximately 7 days (range = 1 to 12 days), cutaneous anthrax begins as a papule, usually on an exposed area, such as the head, neck, or an upper extremity. The papule may resemble an insect or spider bite and may itch.

The papule enlarges and develops a central vesicle or bulla with surrounding brawny, non-pitting edema.

The central vesicle becomes hemorrhagic, depressed, and necrotic, and it may become surrounded by satellite vesicles.

A central black eschar forms, and the surrounding erythema and edema increase. The necrotic ulcer is usually painless, which is an important differentiating feature from a brown recluse spider bite.

Pustules are rarely present in anthrax lesions, and a primary pustular lesion is unlikely to be cutaneous anthrax. Primary lesions presenting as cloudy vesicles may occur.

Lesions progress from papule to vesicle to ulcer to eschar with or without antibiotic therapy as the progression is based on toxin production.

Lesions may be solitary or multiple, and if multiple, they are usually found on the same part of the body.

In evaluating the differential diagnosis, the following considerations can be noted. Patients with plague have painful adenopathy, usually in the groin or axilla. No ulcer is present, and the ulcer edema and eschar found in anthrax are also not present. Anthrax can be distinguished from orf, since there is no edema in this viral infection. Ulceroglandular tularemia is characterized by purple ulcerative lesions that are painful, not pruritic, and not surrounded by a gelatinous edematous halo. Ecthyma gangrenosum occurs in patients with neutropenia and Pseudomonas aeruginosa bacteremia. The chancre of primary syphilis may also be considered in the differential with cutaneous anthrax. The chancre of primary syphilis is painless, as is the lesion of cutaneous anthrax, but the syphilitic chancre is not pruritic and is not surrounded by an edematous halo.

Culture, gram stain, and tissue biopsy may be used to make the diagnosis of cutaneous anthrax.

Anthrax is uncommon in Western Europe. However, the condition is not uncommon in the following regions: the Middle East, the Indian subcontinent, Africa, Asia, and Latin America. Therefore travelers to these areas are at increased risk.

Anthrax is primarily a disease of cattle, horses, goats, and sheep. The causative agent of the disease, Bacillus anthracis, is a gram-positive bacillus. B. anthracis measures 1 µm by 3 μ m and is usually straight but may be slightly curved. The ends of the bacilli are truncated, not rounded. Humans are relatively resistant to this agent. However, in the event of an opening of the skin resulting in the loss of the cutaneous barrier, either large or microscopic, the organism can gain entry.

Cutaneous anthrax is eminently curable if with antibiotics and therefore is rarely fatal. If the condition is not treated, and the organism becomes bacteremic, complications may occur. Hematogenous dissemination occurs in 5-10% of untreated cutaneous anthrax.

Treatment options are outlined in Table I.

Routine vaccination, per the protocol described above, is indicated for at-risk laboratory personnel, military members, and those who may be exposed to infected animals or animal products.

Antibiotic therapy renders lesions culture-negative within hours, but the lethal effects of anthrax are related to the effects of the organism’s toxin. Patients with septic and hemorrhagic shock, which is the final common pathway for end-stage anthrax infection, should be admitted to the intensive care unit for hemodynamic monitoring and management.

Patients with cutaneous anthrax develop a persistent scar at the site of eschar formation. After the eschar falls off, the scar is left. Corneal scaring has also been reported.

It is important to determine if exposure is secondary to animals, or may be due to a bioterrorist incident. The treatment approach may vary if the anthrax was bioengineered. Specimens can be sent to the Center for Disease Control to evaluate the nature of the disease. Physicians should notify their local Department of Health to inform them of the patient with suspected anthrax and to obtain any additional instructions before doing diagnostic tests.

The sample for culture should be transported immediately to the microbiology laboratory fresh in a sterile container or in a bacterial culture tube (e.g. a culturette) for immediate processing for Gram stain and bacterial culture, and fungal and atypical mycobacterial stains and cultures if indicated. 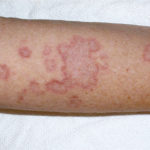