A 78-year-old white man presents to the emergency room with his wife with a chief complaint of altered mental status. He was originally seen at his local emergency room 2 weeks earlier for altered mental status and bradycardia from which he was discharged with a referral to cardiology. His cardiology work-up was negative, and he was then referred to neurology. His neurologist sent him to the emergency department due to concern regarding his progressive functional decline over the past several weeks, particularly in the previous 2 weeks.

The patient reports experiencing weight loss, night sweats, and poor appetite with increasing altered mental status, somnolence, dyspnea on exertion, and difficulty in speech, memory, and math abilities. He has been sleeping most of the day, lacks his usual motivation, and is overall “not himself,” according to his wife. He recently has developed a shuffling gait and had episodes of unresponsiveness in which he stares off for minutes at a time.

The patient’s medical history is significant for hyperlipidemia, coronary artery disease status-post percutaneous coronary intervention (PCI), hypothyroidism, and gout. He admits to recently noting blood in his stool and is overdue for a colonoscopy. His wife denies fever, nausea, vomiting, dizziness, focal weakness, numbness, headache, diplopia, dysphagia, or blurry vision. A chest computed tomography (CT) scan had been completed 2 months earlier and showed multiple waxing and waning bilateral lung nodules, which were concerning for an infectious, inflammatory process. He is a former 38 pack per year smoker but quit 15 years ago.

His vital signs include blood pressure of 144/69 mmHg, heart rate of 45 beats per minutes, respiratory rate of 18 breaths per minutes, and O2 saturation rate of 97%. Significant findings on physical examination include bradycardia, mild confusion, bradyphrenia with delayed responses, and falling backward when seated upright. Glasgow coma score is 15. His gait, muscle tone, and strength are all within normal limits with no focal deficits.

Routine laboratory tests are ordered, as well as urinalysis, electrocardiogram (EKG), and CT without contrast of the head. The EKG demonstrates sinus bradycardia. Basic laboratory values outside normal limits include: hemoglobin, 13.0 g/dL (low); hematocrit, 39% (low); red blood cell (RBC) count, 4.0 mcL (low); fasting glucose, 149 mg/dL(high); and blood urea nitrogen, 21 mg/dL (high). The UA revealed 1+ blood and 21 RBCs. While these findings are concerning, the most significant finding was seen on the head CT scan. It revealed numerous hemorrhagic lesions in the bilateral cerebral hemisphere with associated vasogenic edema, indicating possible hemorrhagic metastases. At this point, the patient is admitted to inpatient neurology for further evaluation with the diagnoses of brain metastases, significant brain edema, and risk of decompensation.

Further inpatient work-up included CT with contrast of the chest, abdomen, pelvis, and magnetic resonance imaging (MRI) of the head. The chest CT showed enlarged subcarinal lymph nodes, likely metastatic left hilar lymph nodes, and a few small lung nodules. The CT of the abdomen and pelvis showed a 4-mm calcification with soft tissue nodularity at the right posterior lateral bladder base, 2 x 1.5-cm left adrenal nodule, and hepatic and renal cysts. MRI of the head, with and without contrast, highlighted >30 hemorrhagic enhancing lesions throughout the cerebral and cerebellar bilateral hemispheres, right basal ganglia, and pontomedullary junction, ranging in size from 0.2- to 1.8-cm. Significant surrounding vasogenic edema in the cerebral hemispheres had resulted in a regional mass effect and mild right uncal herniation.

The patient was prescribed levetiracetam for seizure prophylaxis, dexamethasone to control cerebral edema, and hydralazine as needed for hypertension. Although there was marked improvement in the patient’s cognition following initiation of steroid therapy, the patient and his family were informed that he had stage IV cancer with no curative options due to the extent of the metastasis. Under advisement of the oncology team, the decision was made to pursue empiric whole brain radiation therapy of 30 Gy in 10 fractions. The sole purpose of this treatment was to manage the acute issues of hemorrhage from the numerous brain tumors.

The greatest suspicion for the primary source of the diffuse metastatic disease was lung cancer due to the patient’s significant smoking history and previously discovered lung nodules. An endobronchial ultrasound-guided fine needle aspiration of mediastinal lymph nodes (EBUS) was ordered to define the primary tumor source. The EBUS cytopathology report revealed malignant tumor cells derived from an unexpected source, melanoma. A full body skin examination revealed a lesion on the patient’s upper back that was believed to be the primary source, although confirmatory testing was never performed since it would not alter the diagnosis or management.

With an established diagnosis, the patient was discharged in stable condition to home care on a dexamethasone taper. A positron emission tomography scan following completion of his radiation therapy revealed disseminated melanoma with metastases to the brain, thyroid, multiple thoracic lymph nodes, adrenal glands, jejunum, bladder, and muscles.

Since the patient was unable to tolerate the necessary decrease in dexamethasone to pursue the limited immunotherapy options, his family decided to pursue comfort measures until he died at home 4 months later. 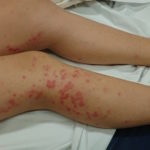